BENSON, AZ – The next time you decide to give your lemons the added heat of a fire-induced flavor profile, be sure that you prepare your selections a bit more carefully than this inflamed trucking incident in Arizona. 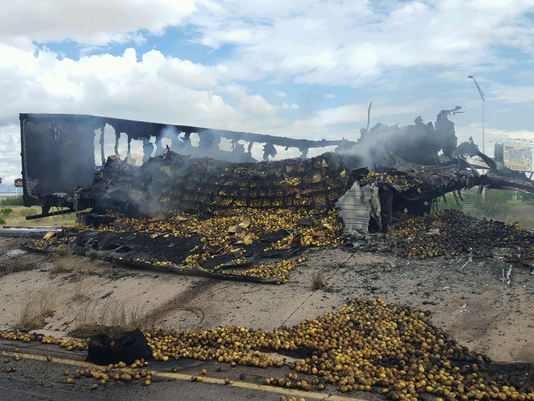 While en route to transport its shipment of fresh lemons to California, an 18-wheeler in Arizona blew out its front tire which sparked a sequence of events leading to the closure of Interstate 10. The highway was closed for 90 minutes while its shipment smoldered on the sidelines.

“The front tire blowout caused a fire to start on the cab portion of the truck and then moved to the trailer,” said Kameron Lee, a Public Information Officer from the Arizona Department of Public Safety, according to bensonnews-sun.com. “The driver and co-driver were able to get out of the cab without any injuries.”

Thankfully, with no one hurt from the crash, the truck accident made for a zesty sight as the truck and its contents sent up a large plume of smoke throughout the Arizona valley, with scorched and toasty lemons strewn across the freeway.

Traffic Alert! @Arizona_DPS troopers on scene of a TT fire WB I10 near MP 304 (near Benson) a lot of cleanup ahead. pic.twitter.com/5A6mqTm5aS

Authorities stated that the fire resulted in a total loss of the rig, a 2013 International, as well as its enclosed shipments. Transportation on the freeway remained delayed for the majority of the day while clean-up ensued.

What steamy situations will fresh produce find themselves in next? Stay tuned with AndNowUKnow for the latest in transportation and shipping reports.