GAYTON, UNITED KINGDOM – The holidays are a time for feasting–and taking as many last-minute trips to the grocery store as needed until all of the ingredients are finally in the pantry. A local U.K. man, however, has saved himself any last-minute trips to the store for this nutritious orange root after growing a carrot of epic proportions. Cue the visions of carrot-based holiday dishes dancing in my head! 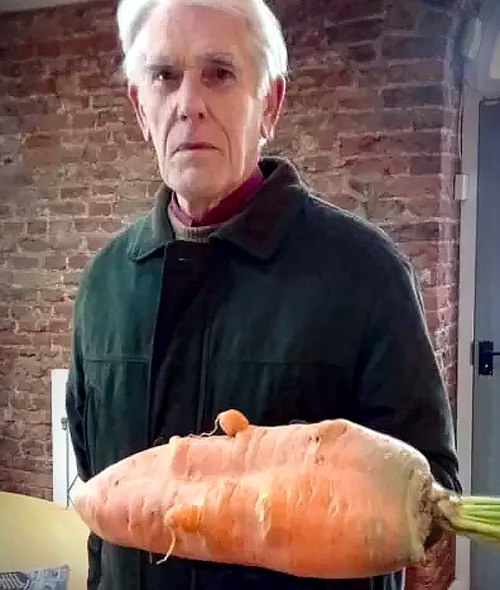 According to Lynn News, John Elliott said he was surprised to find a 5-pound, 13-inch long carrot growing in his garden.

“It was such a surprise. I haven’t used any special soil or anything else. I just grew it the same as how I grow my other vegetables,” John said to Lynn News.

And this isn’t the first time the 77-year-old has come across noteworthy fresh produce in his personal vegetable patch.

“I have had other rather large veg grow in my garden before I cast them aside. I also have a rather large parsnip with many roots growing. It is like a parsnip octopus,” he added.

While my eyes are constantly too large for my stomach, John has realized the carrot is too big for just himself and plans to take the carrot to his local butcher for display purposes, before seeing if his local inn wants it for their lunches.

For more on ginormous fruits and veggies growing in the produce industry, keep checking back with AndNowUKnow.