BROOKLYN, NY – The Guinness Book of World Records will have a new name to scribe into its scroll of achievements, this time adding Wayne Algenio for most Carolina Reaper chili peppers consumed in under 60 seconds.

"I went in with the mentality that I was going to go all out, but I did not know I was going to win," Algenio told ABC News in an interview following the contest. "It felt amazing, [but] it was in my head, 'I'm never doing this again.'"

Heat-heavy fans will recognize the Reaper as the hottest pepper in the world. Measuring in at over 1.5 million on the Scoville heat unit scale, Algenio had to consume 22 of the peppers in order to overtake the head title, as seen in the video above.

In an added fire-feeling obstacle, contestants could consume no liquid while eating the peppers themselves, and for a minute following the last piece was eaten.

"You eat as many as you can in a minute and then after that minute is over, you have to stand there for another minute without vomiting or drinking any liquids," Algenio stated. "After I stopped, I could feel the burn in my throat. It's an excruciating pain." 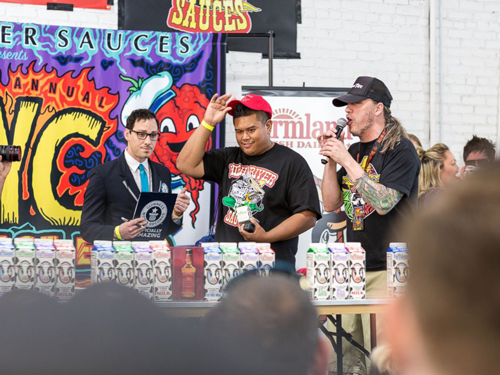 The peppers were weighed to ensure contestants were eating the same amount of Reaper peppers in grams. Following the blazing consumption, contestants doused their gullets with fat-free milk.

Algenio is a veteran to the competitive-eating world, but won this latest Guinness title at the Puckerbutt Pepper Company’s Smokin Ed’s Reaper Eating Challenge at the NYC Hot Sauce Expo. This was Algenio’s second time competing for the Reaper reward.

"I think I'm done," Algenio finished with a laugh. "Unless anyone breaks it, then I'll consider doing it again."

Douse yourself in the spicy seasonings of the latest industry news, by continuing to read AndNowUKnow.