UPDATE (JULY 8, 12:37 PM PACIFIC): At 3:10 pm ET, trading resumed on the New York Stock Exchange after it had been suspended for nearly four hours.

NEW YORK CITY, NY - At 11:32 am local time the New York Stock Exchange (NYSE) came to a screeching halt. About ten minutes later it was announced that all open orders have been canceled.

According to Tech Crunch and CNBC reports, a computer glitch is what brought the exchange to a stop this morning.

“We’re currently experiencing a technical issue that we’re working to resolve as quickly as possible,” an NYSE Spokesperson announced, according to Tech Crunch. “We will be providing further updates as soon as we can, and are doing our utmost to produce a swift resolution, communicate thoroughly and transparently, and ensure a timely and orderly market re-open.”

Though the Department of Homeland Security is involved with the situation, no cyber attack is reportedly suspected. At 12:28 pm NYSE confirmed via its Twitter account that the glitch is internal and not from any kind of security breach. 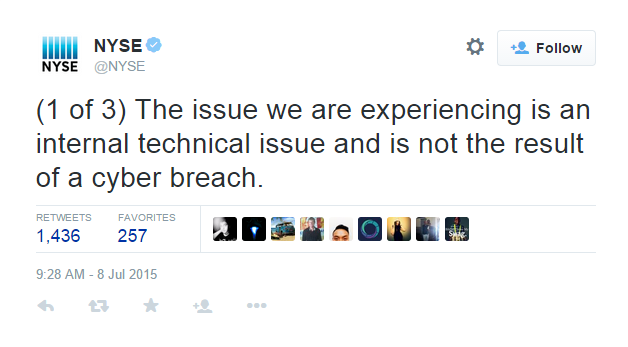 While new deals are canceled, stocks on other exchanges do continue to trade at this time including NASDAQ and BATS Global Markets. 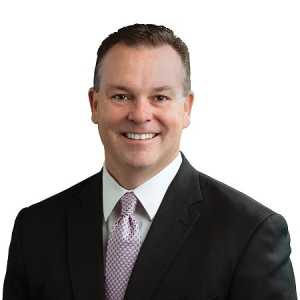 According to Joe "JJ" Kinahan, Managing Director at TD Ameritrade, business continues as usual despite the market being down. “I think it’s a credit to the system,” Kinahan told CNBC on a call this morning as he commented that the process is being handled very well. “10 years ago this would have been a major problem, but now it’s a seamless event.” 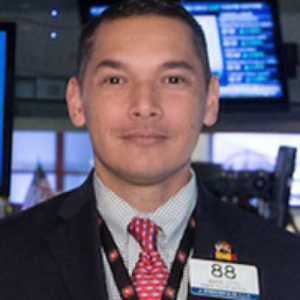 Market Maker for J. Streicher & Co. Mark Otto appeared to agree, according to Reuters, stating on the NYSE floor that the situation is under control and traders were just waiting for word. “There's no sign of panic at all.”

Reuters reported that the NYSE accounted for about 13.4 percent of all equities volume last month and 12.5 percent as of yesterday according to BATS Global Markets data. 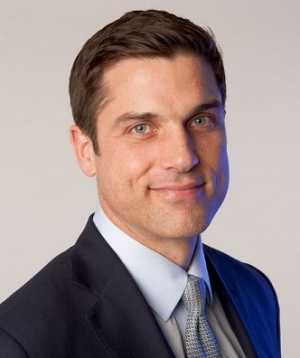 NYSE President Tom Farley told CNBC live that it does plan to have the system back online from 2:45 to 3:00 p.m. local time today, and will continue to update the media on the situation as it develops. Previously the NYSE decided that it would announce any additional plans at 2:30 pm local time if the system was not back up by then.