UNITED STATES - As our holiday dinners settle in our bellies, a storm is brewing that could impact the entire country. Weather experts are reporting a cross-country weather system that is anticipated to spread throughout California, starting Christmas Day, and move through the Rockies, Plains, Midwest, and Northeast, bringing with it heavy rains, snow, ice, and thunderstorms.

According to The Weather Channel, Southern California is set to receive another bout of heavy rains starting on Christmas and persisting through Thursday. Most of San Diego County and the Los Angeles Basin are expected to receive about an inch of rain, which has the potential to trigger some flooding in areas like freeways and ramps, and may contain some debris flows in areas recently affected by wildfires. The news source also reports that winter storm watches have been posted by the National Weather Service over some of the Southland mountains, including Big Bear Lake, where over a foot of snow is predicted for regions over 3,500 feet in elevation throughout Thursday night. 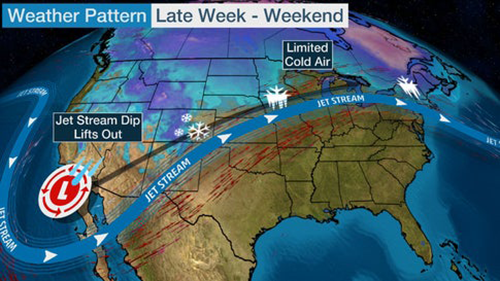 The Rocky Mountains, including parts of Colorado, Arizona, and New Mexico, and the adjacent Plains region are expected to receive snow as well, which is anticipated to fall starting Thursday and Friday, and continuing through early Saturday at least. The Weather Channel predicts as many as six-plus inches of snow, but is not sure how quickly the snow will exit the region.

Moisture from the storm system will move into the Plains and Midwest on Friday night, continuing into Saturday, overlapping with some slightly cold air, creating areas with freezing rain, sleet, or snow. This precipitation may stick around in the Midwest through Sunday, and from there could potentially spread into the Northeast. Forecasts predict that the Interstate 95 Boston to Washington corridor may see rain, but likely no snow or ice. Even the Southern Plains, mid and lower Mississippi Valleys, may see heavy rain and thunderstorms.

However, despite the doom-and-gloom forecast, The Weather Channel predicts the winter storm system to be more of a nuisance than a danger. According to the news source, only a marginally cold air mass appears to be in place east of the Rocky Mountains, and the jet stream is expected to weaken in the Plains and East before being caught in a northern-stream jet disturbance and quickly sweeping east.