LOS ANGELES, CA - Let’s be honest: if I was a Postmates deliverywoman and my average Saturday was rocked by Chrissy Teigen’s name appearing in my dock, casually requesting fresh produce, I might run all over town, collecting all the fresh fruit and veg I could find, just to appease a modern-day queen. It's relatable.

This past weekend, according to Los Angeles Times, Chrissy Teigen attempted to place a simple order of five limes via Postmates. But, instead of receiving a normal amount of the tiny fruit, Teigen was delivered five bags for a grand total of almost 200 limes. 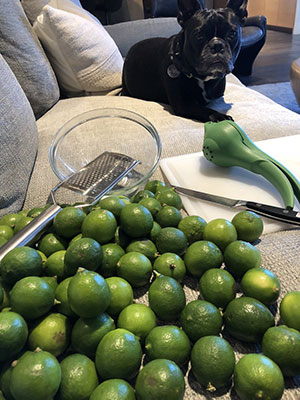 And, naturally, when life gives you 200 limes, you make more than enough baked goods—which is exactly what the model did. Taking to Twitter, Teigen kept her followers updated, tweeting a photo of her dubbed “couch lime command station,” and followed up later with the tweet, “I’m still making pies. I don’t even like lime.”

The celebrity ended up with a piña colada key lime pie, a key lime banana custard, and a key lime cheesecake, which tragically fell on the floor and was turned into cheesecake puddings with crust crumbles.

History has a funny way of repeating itself; this isn’t the first time Postmates has delivered more than enough fresh produce to Chrissy Teigen’s doorstep. In January, she tried to order six bananas and instead received six bunches of bananas.

While Postmates and other online food delivery services iron out the kinks, maybe Teigen should return to crowdsourcing as a means to last-minute grocery shop. But until then, I’ll be on Twitter, awaiting the next Chrissy Teigen produce adventure.