Grower/shippers in the Salinas Valley donated pallets of fresh vegetables, that were then sold by S. Katzman Produce at New York’s Hunts Point Market. Sales of the produce totaled $14,720, with an additional donation by Katzman of $15,280, and all proceeds went to benefit Ag Against Hunger. 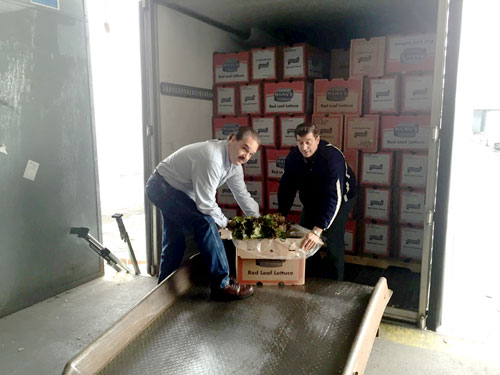 “It’s a tremendous opportunity to work with the grower/shipper community in the Salinas Valley to help raise money for a truly worthwhile organization like Ag Against Hunger,” said Stephen Katzman, President of S. Katzman Produce. “Their goal of helping to end hunger by providing fresh, healthy surplus fruits and vegetables from local farms to food banks and schools is inspirational for all of us in the produce business.”

According to a press release, Salinas companies that donated fresh vegetables to the cause included:

Transportation of the donated produce and the cost of freight services were provided by C.H. Robinson.

“Thank you just does not seem adequate for what not only our produce partners, C.H. Robinson and S.Katzman Produce have done for Ag Against Hunger with this fundraiser,” said Executive Director of Ag Against Hunger, Lynn Figone. “The generosity is so amazing and inspiring. I would also like to thank Mr. Katzman for his very generous donation to our organization, we are so grateful for his support to help us continue to forward our mission.”

For the last 25 years, Ag Against Hunger has worked with growers, shippers and processors in Monterey, Santa Cruz and San Benito Counties to channel fresh, healthy surplus produce to food banks, food assistance programs, and schools. The organization currently services 21 food banks within California, 4 food banks throughout the West coast, and participates in the More Produce in Schools program.

Founded in 1905, C.H. Robinson is a global provider of multimodal logistics services, fresh produce sourcing, and...

Ag Against Hunger’s mission is to help end hunger by channeling fresh, healthy surplus fruit and vegetables from local...