CENTRAL U.S. - It’s been the wettest winter on record for the U.S., and things aren’t about to dry up anytime soon in the Plains and Midwest. This week, severe weather is expected in those regions, including thunderstorms, heavy rain, and possible flooding.

According to the Weather Channel, the storm system developed from mild air and moisture from the Gulf of Mexico, then traveled north as a strong area of low pressure moved through the central states. Having already traveled through the West, the system will continue to drop snow as it travels across the Plains, possibly resulting in a blizzard. Moderate to heavy rainfall and thunderstorms are expected to hit as well, which could lead to flooding due to saturated and frozen ground, as well as a rapid snowmelt.

The potential for severe thunderstorms is expected to increase across the southern Plains on Tuesday, traveling from eastern New Mexico into southwestern Oklahoma and western and central Texas. The thunderstorms originating in New Mexico are forecast to organize into a squall line by evening, eventually tracking eastward into the southern Plains well into the night, reports the Weather Channel. According to the weather monitoring site, a major threat will be damaging winds and the possibility of tornadoes and isolated large hail. 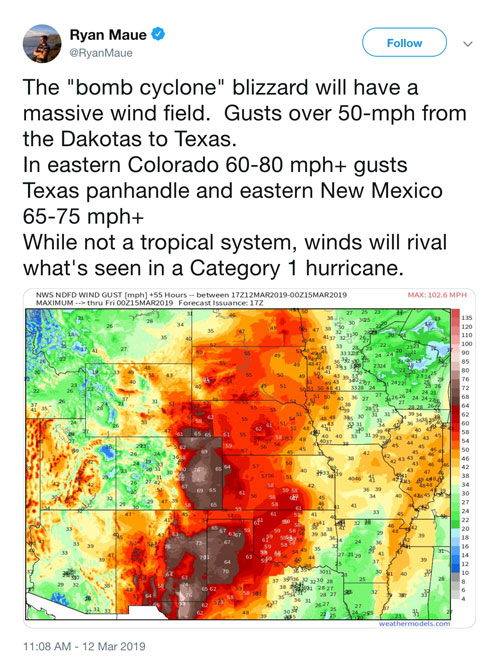 Depending on how unstable the atmosphere becomes, severe storms may hit on Wednesday afternoon or evening ahead of a cold front from eastern Texas to the lower- and mid-Mississippi Valley. Even if storms don’t develop, there is still the fear of damaging wind gusts, and even isolated tornadoes.

Come Thursday, the risk of strong to severe thunderstorms may spread east, stretching from the central Gulf Coast to the lower Ohio Valley. Currently, weak instability is anticipated, which will limit the severity of the storm, but isolated severe thunderstorms may still develop in the afternoon and evenings. As with other regions, damaging wind is the main threat, but isolated tornadoes are possible as well.

With heavy rain comes floods, and the risk is high in these regions. Flash flooding and river flooding in parts of the Plains and Midwest are expected this week, with the heaviest rainfall anticipated on Tuesday night through Thursday. The National Weather Service has issued flood watches from Minnesota and western Wisconsin into Iowa, southeastern South Dakota, southern and eastern Nebraska, and western and central Kansas, according to the Weather Channel.

The central and southern Plains, Mississippi Valley, and mid-South are expected to receive one to three inches of rain through Friday. With the ground already saturated, and lingering snowpack melting as temperatures rise, significant runoff is expected. Residents of the affected areas are encouraged to clear snow and ice from storm drains before the rain starts to reduce the risk of flooding. 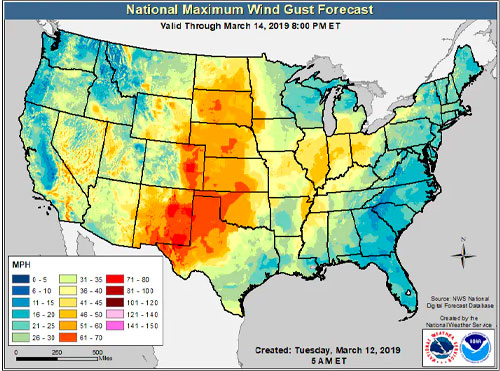 As milder temperatures break up the ice on frozen rivers, ice jams, which clog river bends and get caught in obstructions like bridges, become more likely. Ice jams are particularly troubling because water rises can occur and flood upstream locations, and when an ice jam breaks up, flooding can occur in downstream locations.

The upper Midwest and Plains can expect to see a rise in rivers, creeks, and streams, possibly leading to river flooding in some areas. Record or near-record river water levels could occur in several major rivers, including the Missouri River at Brownville, Nebraska; the Wood River near Gibbon, Nebraska; and the West Nishnabotna River near Hancock, Iowa. Flooding in these rivers have the potential to threaten inhabited areas.

Flooding will be a major issue for the Midwest as it moves further into spring, due to a near-record snowpack in parts of the region.

What will be the fallout from this week of severe weather, and how will the storm affect the produce grown in these areas? Keep reading AndNowUKnow for more updates.