SOUTHEAST UNITED STATES - Over the weekend, heavy snow and ice descended upon North Carolina, Virginia, and southern West Virginia, forcing travel shutdowns and leaving nearly 200,000 without power. A winter storm warning was issued to the three states as more than a foot of snow fell on Saturday and Sunday.

Reports from NBC News stated that by the end of Sunday, parts of North Carolina and Virginia were covered in 18 1/2 inches of snow. Areas in West Virginia and Tennessee reported an approximate 12 inches of snow. 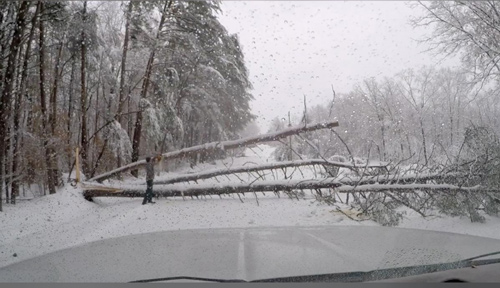 As the storm continues to move southeast, the storm will occur as a mix of ice and rain. This, AccuWeather noted, will not help improve road conditions, as the additional weight of ice and water on top of snow makes it particularly difficult to remove. Officials continue to urge people to stay off of the roads and limit traveling.

In addition to road closures, widespread flight cancellations were issued, resulting in almost 2,000 canceled flights over the weeked. According to a report from Reuters, the storm prompted more than 1,000 flight cancellations at Charlotte/Douglas International Airport alone.

Although there have been no official reports on the status of produce in the areas, AndNowUKnow will be looking out for any produce affected by the snows.