HOUSTON, TX – Foodservice distributor Sysco Corp. has recently released its Q3 earnings report for 2016 showing a $60 million improvement in adjusted operating income. For the third fiscal quarter ended March 26, the earnings report showed a sales increase of 2.2 percent to $12 billion, and gross profit increase of 4.1 percent to $2.1 billion for the company.

“Our third quarter financial results were strong as we remained focused on servicing the needs of our customers and made steady progress toward our three-year plan financial objectives,” said Bill DeLaney, Sysco’s Chief Executive Officer, in a press release. “As a result, we generated solid gross profit dollar growth of 4 percent, while effectively managing ongoing deflationary pressures.”

Other findings in the Q3 report included:

The report also revealed that adjusted earnings per share (EPS) increased $0.06 to $0.46. Sysco shares are trading up in light of the report, with share value sharply increasing 2.19 points (4.76 percent) since the opening bell on Monday. 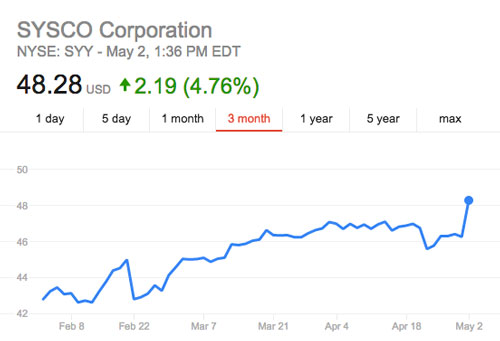 The Q3 earnings report comes at the heels of last month’s announcement of three new executives, Greg Bertrand, Scott Sonnemaker, and Bill Goetz, who will assume their new posts at Sysco this July.

As always, you can increase your learnings-per-share potential by reading AndNowUKnow.