WEST COAST - After a period of record high temperatures across the west coast, rain, snow, and cooler air are all set to hit once again at the end of the week.

"After a quiet several days, the pattern will turn unsettled again by Friday," explained AccuWeather Meteorologist Ryan Adamson. "Rumbles of thunder are also possible across portions of western California,” adding that these cities could include Santa Rosa, San Francisco, and Sacramento.

San Francisco, Portland, and Seattle all saw record high temps last weekend, but residents will now be seeing a shift as soon Friday and throughout the weekend. Some of these storms could become strong and produce locally damaging winds and heavy rainfall, according to AccuWeather, with the potential for thunderstorms and wildfires to follow. Snow is also expected in the Sierra Nevada if temperatures reach low enough levels. 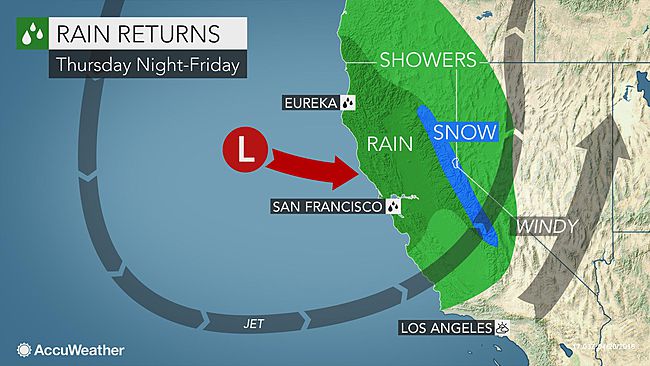 Travel and transportation will also be a concern throughout California, with the potential to delay some outdoor growing activities.

Southern California, where the drought is most prevalent, will also see some rain this weekend. With National Weather Service Meteorologist, Curt Kaplan, telling LA Daily News that there could be drizzle in the Greater L.A. area Friday morning and again Saturday morning as a result of a deepening marine layer, which will help return temperatures to roughly normal levels for this time of the year.

Of course, any rain that ends up hitting California soil will be more than welcome, however no substantial dent in the state’s drought is expected. The rain, snow, and thunderstorms are all expected to quiet down Saturday into Saturday night in California, Adamson added, but showers will still be possible across Washington and Oregon.