LOS ALAMITOS, CA - In this world, there are leaders and there are visionaries, passionate adventurers and champions for change, pathfinders and path-breakers—Dr. Frieda Rapoport Caplan was all of them. It is with our deepest condolences that we share the recent passing of Frieda. She meant so many things to so many—and a light to us all. Frieda passed away early in the morning on January 18th at her home. She was 96 years old.

Frieda’s daughters, Karen and Jackie, and her granddaughters, Alex and Sophia, are so grateful for the outpouring of love and stories they have received since Frieda passed away Saturday morning. The family will soon be sharing the details of a Celebration of Life which will be held on February 22, 2020.

It is truly impossible to encapsulate a life so rich and full, so please consider this a short walk down memory lane. Frieda’s contributions to our industry are many, and include such ground-breaking introductions as the kiwifruit—earning her the title, “Queen of Kiwi”—and a multitude of specialty/exotic fresh fruits and vegetables including Sugar Snap Peas™, Hothouse Cucumbers, Habanero Chiles, Kiwano® Melons, and those purple sweet potatoes we love so much—just to give you a taste of her long legacy. 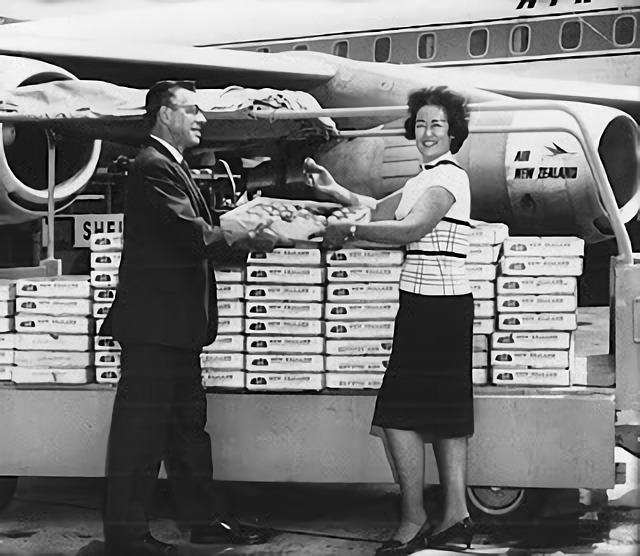 Frieda was also truly impactful and graceful in her efforts as a female business owner in an overwhelmingly male-oriented industry to give women a voice, a mentor to mirror, a role model to strive to become, and an overall brilliant and passionate human to call an advocate.

As Produce Marketing Association’s CEO Cathy Burns shared on the passing of the industry leader, Frieda provided an example to many aspiring women executives.

“In conversations we shared, it was very apparent she always had an open door to those seeking a mentor and guidance. She also delighted in the fact that her daughters and granddaughter were carrying forward the torch she lit when she founded Frieda’s, Inc. in 1962,” Cathy wrote in a statement. “Recently PMA, through our Center for Growing Talent, honored Frieda with our Women’s Catalyst Award. The award recognizes an outstanding individual in the produce and floral industries who cultivates women’s potential by mentoring and fostering a path for leadership, development, and participation. As seen during the award presentation at Fresh Summit 2019, countless women who have benefited from sitting under Frieda’s learning tree joined in our celebration of her.” 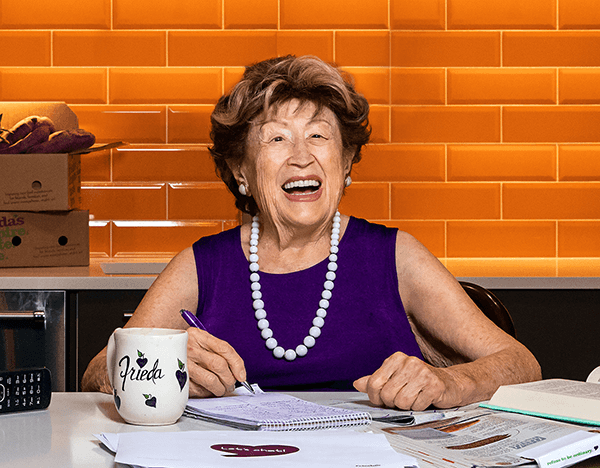 Cathy also shared that, upon joining PMA, Frieda’s office was among her very first “must do” member visits, and she literally welcomed her with open arms to our industry. In the five years since, it was not uncommon for Cathy to open her e-mail and find a note from Frieda offering her unique insights on trends, innovation, and inspiration.

“Throughout her career, Frieda has been described as a fearless entrepreneur, product innovator, produce pioneer, trailblazer, icon, and vanguard,” Cathy reflected. “She is all these accolades to others and me, but most of all I am incredibly blessed and proud to have called her a friend.”

If we look back to 1962, we see one of the historical moments that shifted the industry for us all. Frieda established Frieda’s Finest/Produce Specialties Inc. on the male-dominated Los Angeles Wholesale Produce Market—a legacy she now shares with her daughters Karen Caplan and Jackie Caplan Wiggins as well as her granddaughters Alex Berkley and Sophia Jackson.

It goes without saying that, at that time, Frieda was one of very few women in the produce industry, and was the first to own and operate a U.S. business in our industry. Frieda quickly developed a reputation for buying and selling new and unusual produce specialties. Frieda has made a long-lasting imprint on the produce industry. This all can be seen in the 2015 documentary film, Fear No Fruit. To view the documentary, visit Friedas.com to download and watch it for free. 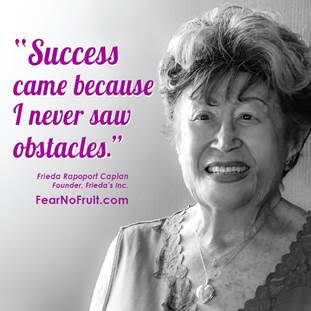 Frieda has received numerous awards and honors for her achievements, all ranking with the likes of this recent PMA honor, and which include The Los Angeles Times naming Frieda one of 12 Southern California business personalities who shaped the course of American business in the 1980s (along with Steve Jobs, Jane Fonda, and Michael Milken), in 2013, Frieda was selected as the Gold Stevie® Award winner for Lifetime Achievement in Business at the 2013 Stevie Awards for Women in Business, and Frieda was awarded an honorary degree of Doctor of Humane Letters during Cal Poly San Luis Obispo’s commencement ceremony for her achievement as one of the nation’s most successful female entrepreneurs.

To honor her legacy, a CBS Sunday Morning segment that was taped in November about Frieda which was aired Sunday, January 19, as a wonderful tribute to a mother, a friend, and mentor, and an industry visionary that led an incredible life never to be forgotten.

We at AndNowUKnow extend our deepest condolences to Frieda's family and friends during this time as well as to all those who knew her and had the opportunity to be impacted by an unrivaled legacy.