Peter Magowan, Former Safeway Chairman and CEO, Has Passed Away

SAN FRANCISCO, CA - Peter Alden Magowan, the former Safeway CEO and Chairman and an owner of the San Francisco Giants, died peacefully January 27 from liver transplant complications at his Pacific Heights home surrounded by family and friends. He was 76.

Peter is survived by his wife, Deborah Magowan; five children; 13 grandchildren; and three brothers. The life and many accomplishments of Peter Magowan will be celebrated by his family at a private memorial, as reported by The San Francisco Chronicle.

Following high school in Massachusetts at Groton, Peter graduated Stanford University in 1964 with a degree in American literature. In 1966, he received his master's degree in Politics, Philosophy, and Economics from Oxford University in England. Peter completed his post-graduate studies at John Hopkins School of Advanced International Studies in Washington, DC. 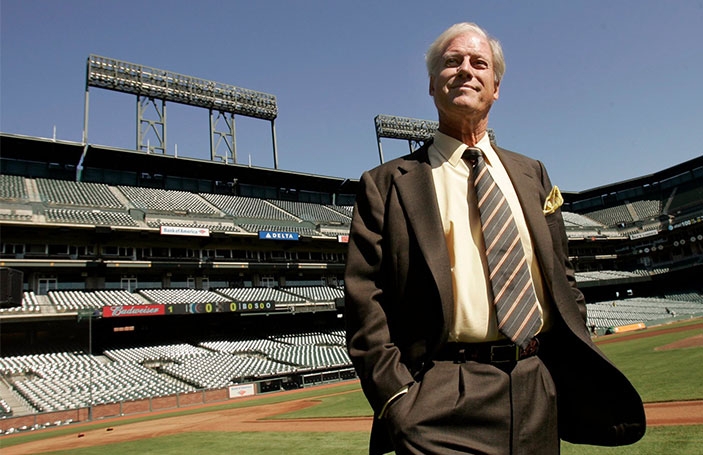 After two summers working at the State Department in Washington, DC, Peter joined Safeway in the Washington area as a checker, shelf stocker, and produce clerk prior to working his way up the corporate ranks. In 1979, at age 37, he was appointed Safeway Chairman and CEO.

In 1979, Peter met his second wife, Deborah Johnston Cook at a dinner party hosted by her brother. The couple married in 1982 in Dallas. They moved that same year to San Francisco, with Peter working in Oakland at Safeway headquarters.

In 1992, Peter, alongside a group of fellow San Francisco investors, led a $100 million privately-funded bid to prevent the relocation of the Giants to Tampa Bay, Florida. The successful mission had special meaning for Peter, who attended Giants games as a boy at the old Polo Grounds in New York. Having seen the team abandon New York for the West Coast, Peter was determined to prevent a similar exodus from San Francisco 35 years later.

Upon successfully acquiring the Giants in 1993, Peter stepped down from his role as CEO at Safeway, while remaining Chairman, to lead the Giants as its President and Managing General Partner. One of his first appointments was signing Barry Bonds to a $43.7 million contract which, at the time, was the largest Major League Baseball contract. Bonds went on to shatter MLB's career home run record and, in the process, garnered three MVP awards.

During Peter's tenure, the Giants reached the playoffs four times. The team also achieved its first San Francisco World Series at-bat in 2002. The storied history of the Giants franchise was also an important touchstone for Peter, who returned beloved former Giants, such as Hall of Famers Willie Mays and Orlando Cepeda, back to the team by signing them to lifetime special advisor contracts.

Under Peter's leadership, the Giants, in 1994, were the nation's first professional sports team to raise funds and awareness in the fight against HIV/AIDS by launching a special event game, "Until There's a Cure Day," that is now in its 20th year. In 1991— under the Giants Community Fund umbrella—Peter developed the fund's Junior Giants, a free baseball and life skills program that annually serves more than 20,000 at risk kids. In 2008, Peter honored the Giants' storied history by establishing the team's Giants' Wall of Fame at the ballpark.

In May 2008, Peter announced he would step down at the season's end as the Giants leader. His tremendous leadership was lauded in 2016 when Peter was inducted to the Bay Area Sports Hall of Fame.

Peter was a member of the Pacific Union Club and Chairman of the Giants Community Fund Advisory board. A natural athlete, Peter was an avid skier and tennis player. He and his wife also enjoyed many sunny weekends at their country home in St. Helena where Peter lovingly tended his roses and peonies. Even after his retirement, the Magowans faithfully cheered on their team at home games from their longtime seats behind the Giants dugout.

Donations in Mr. Magowan's memory may be made to the Peter A. Magowan Fields for Kids, a Giants Community Fund field renovation program for underserved communities.

We offer our sincerest condelences to Peter's family.