READING, PA - Redner’s Markets has announced this week that its Founder Earl W. Redner has passed away at 91 years of age. Known for his warm approach to employees and his fast adoption of retail trends, Earl “The Chief” Redner will be greatly missed by the industry. 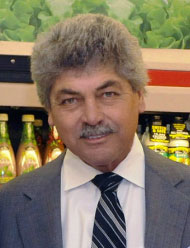 "My father was a role model for not only myself and our family, but also the food industry," the company’s current President and CEO Richard Redner said in a statement. "He lived a long, successful life and made a tremendous difference in the community. I'm thankful he was able to see his dream and company become more successful than he ever imagined. His spirit and enthusiasm remained high, and he continued to attend board meetings, visit stores, and would enjoy speaking with our employee-owners often."

As the company explains on its website, Earl began his career in food at just 15 years of age, when he joined the Grand Union Tea Co. in Middletown, NY, in 1940 as a potato bagger and furnace stoker. Earl’s next 29 years of life were spent in various positions at Grand Union, including Assistant Store Manager, District Sales Manager, Division Grocery Sales Manager, and Superintendent of stores in Washington, DC. He was the youngest Grand Union employee ever to hold the titles of Manager, District Manager, and Store Superintendent, the company added.

But 1970 brought the winds of change to Earl, who gathered up enough stock and pension money with his wife Mary to buy two small supermarkets near Reading, PA. After a successful start, the couple reportedly decided to expand, in part because their sons, Richard and Gary, wanted a career in the food business, but also to provide more career opportunities for their employees.

The Redners doubled down on this goal in 1975, forming an Employee Stock Ownership Plan. The Morning Call explained that this plan ensured that any employee who was more than a year into their service and working over 20 hours a week would receive company stock. This move made Redner's the first employee-owned grocer in Pennsylvania.

While the first nine years of operation, Redner’s went under the IGA Food Stores name, 1979 brought the official name change to Redner's Markets. In March 1987, Earl once again moved to stay on the cutting-edge, deciding to change formats and open its first Warehouse Market.

Redner retired in October 1990, with his sons, Richard and Gary, assuming management of the company. Richard Redner continues to lead Redner’s to this day, while his son, Ryan Redner, is Chief Operating Officer. Redner’s currently operates 44 warehouse markets and 21 Quick Shoppes throughout eastern Pennsylvania, Maryland, and Delaware.

AndNowUKnow would like to extend our condolences to those affected by Earl’s passing.