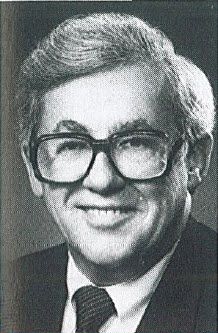 ALEXANDRIA, VA - News is coming out that the industry has lost one of its finest elder statesmen, with the passing of former United Fresh President and CEO Bernard J. Imming. According to his obituary in the Washington Post, he went peacefully at the Goodwin House Bailey's Crossroads on September 22nd, 2014. He was 94 years old.

Tom Stenzel, United Fresh President and CEO, said in a statement, "Bernie was a wonderful leader of our association and the produce industry.  He joined United in 1948 at the United Merchandising Institute in Kansas City, later moved to Washington, D.C., was promoted to President in 1975 and retired in 1985.  I was fortunate to join the staff in 1993, and Bernie still served as a mentor to me.  His regular phone chats and drop-bys to the office were times for me to pick his brain about industry issues, but really learn more about the culture that is an essential part of our industry's character.  I was so pleased when Bernie could travel to New Orleans for our convention in 2011.  It wasn't an easy trip for him but I've never seen him happier than seeing old friends and rolling around the trade show floor in his wheelchair.  We will miss him."

During WWII Bernard served his country honorably in the Pacific theater, retiring from active duty as a First Lieutenant, U.S. Army Reserve. He would go on to hold a whole host of prestigious positions, including:

Visitation will be held at Everly-Wheatley Funeral, 1500 W. Braddock Road, Alexandria, VA at 10 am, Wednesday, October 1, 2014. Funeral Mass will take place at 11 am followed by interment proceedings at the Columbia Gardens Cemetery.

In lieu of flowers, Bernard's loved ones have requested that contributions be made to the Alexandria Rotary Foundation, PO Box 32066, Alexandria, VA 22320 or the Goodwin House Foundation, 3440 S. Jefferson Street, Falls Church, VA 22041.

Everyone at AndNowUKnow would like to extend their heartfelt condolences to Bernard's family and loved ones. He will be missed.