SEATTLE, WA - Amazon is reportedly looking to continue its bid into grocery's brick-and-mortar market. It wasn’t too long ago the company dominated headlines with the unveiling of its cashierless grocery store, its first grocery concept utilizing advanced technology to streamline consumers’ shopping experience without the need of cashiers. One has to wonder if expansions of the format are officially on the table, as news hits of the e-tailer eyeing four Fairway Market stores in New York and New Jersey.

According to the New York Post (NYP), the Jeff Bezos-backed e-tailer is bidding on four of the 14 stores owned by Fairway Market, which previously announced bankruptcy. The auction for the sale started off this past Monday, with negotiations held online and via phone. The stores of interest include one in Pelham, New York; one in Brooklyn, New York; one in Woodland Park, New Jersey; and one in Paramus, New Jersey. 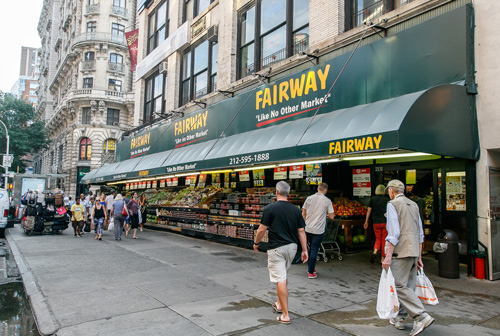 This is the most recent interest in Fairway's assets, with ShopRite's Village Super Market having already made a bid for both stores and a facility, as did Bogopa Enterprises. While both qualifying bids were over $70 million, the news source did not disclose how much Amazon might have bid for the locations on the block.

Amazon is remaining tight-lipped on future plans, however. Although with the popularity of its Amazon Go convenience stores rising, there is the possibility that the e-tailer could be expanding in the East.