Could a Sysco and US Foods Merger Get a Second Chance?

HOUSTON, TX & ROSEMONT, IL - Those of you who have been in the industry in the past two years or so are probably very familiar with the failed $8.2 million merger attempt between Sysco and US Foods. But what some of you don’t know, perhaps, is that this deal may not be dead in the water after all. With a new Republican administration coming into power in 2017, new appointments to the Federal Trade Commission (FTC) could bring revisits to several of the country’s recent antitrust cases—namely Sysco and US Foods.

As we’ve previously reported, the FTC voted 3-2 in favor of a lawsuit to block the two companies from merging, saying that it would create a dominant national company that could raise prices and reduce service. But what makes this notable, according to an article from Bloomberg, is that it was voted down by a Democratic majority, 3-2 along party lines. 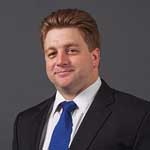 Now, Joshua Wright, a Republican and one of the two FTC commissioners who voted to pass the deal, has been selected as a part of President-elect Donald Trump's transition team, making analysts suspect a new FTC Commissioner and Chairman may be in the cards.

As Bloomberg puts it, “That’s good news for Sysco and US Foods.” An increasingly Republican FTC is likely to be more willing to accept the Sysco-posed argument that even if combined, the "overwhelming majority” of competition would come from local food-service distributors, rather than those with nationwide capabilities. 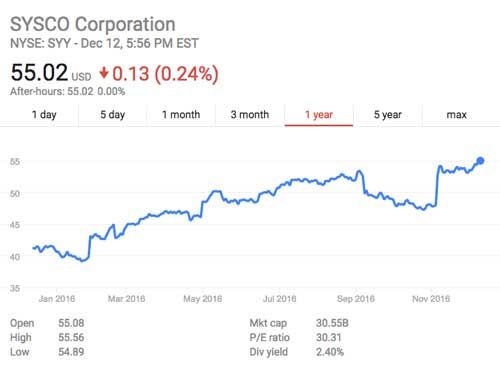 Furthermore, even though both US Foods’ and Sysco’s value have climbed significantly since the deal fell through, the growth has been in tandem. Both US Foods and Sysco have been trading at their respective all time highs, Bloomberg notes. 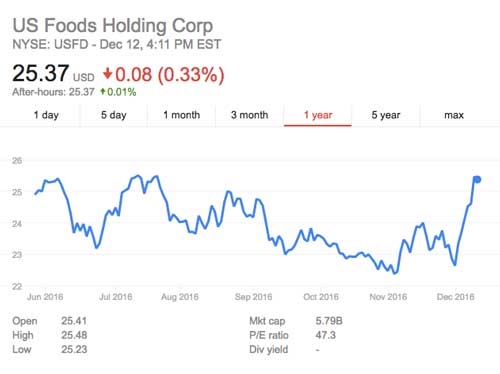 “A deal still makes strategic sense, especially if the benefits of scale, improved productivity, and enhanced product offerings can propel the combine company toward targeted annual cost savings of at least $600 million (within four years) as previously projected,” writes Gillian Tan in her article. “Assuming those synergies, and if Sysco funds roughly 15 percent of the transaction with cash and is willing to pay a 30 percent premium, a deal would be 22 percent accretive, according to data compiled by Bloomberg.”

Is this something that could be affecting produce industry sales as soon as next year? While this theory is largely speculation as of right now, you can bet it's one the team at AndNowKnow will be keeping a close eye on.