NEW YORK - The state of New York has officially issued a drought watch, the first of four levels of state drought advisories ("watch," "warning," "emergency," and “disaster”). This is the first drought watch in the state since 2002.

"While most public water supplies are still generally normal throughout the state, below normal precipitation over the last nine months, low stream flows, and reduced groundwater levels have prompted the need for this action," explained New York State Department of Environmental Conservation Commissioner Basil Seggos, in a statement. "We are encouraging residents throughout the state to conserve water whenever possible during the coming months."

While there are currently no statewide mandatory water use restrictions in place, according to news source The Bradford Era, local public water suppliers may choose to require them depending on what the local need is. 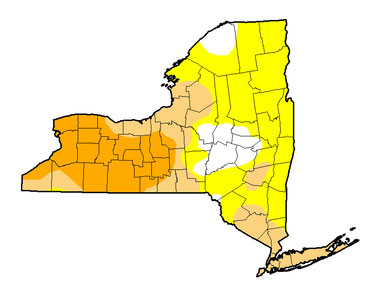 According to the latest report from the National Drought Mitigation Center, nearly one quarter of New York state is in a severe drought and about 47 percent of the state is in either moderate or severe drought.

Other highlights from that report include:

While it is too early to tell how this may affect the state’s fresh produce industry, it's important to note that there may end up being water restrictions in the future if the state increases the drought advisory from “watch,” to one of the higher levels. AndNowUKnow will provide the industry with updates as we continue to look to the state’s water supply.