HOUSTON, TX - Storms have caused flooding and travel delays in the Houston, Texas-area, moving northeast toward the Carolinas. 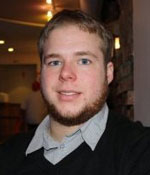 "The greatest risk of flash flooding on a regional basis will extend from part of northeastern Texas to portions of Louisiana and Mississippi," according to AccuWeather Meteorologist Evan Duffey. "However, flooding on a more isolated, urban basis can occur just about anywhere in the Deep South this week."

Over 3 inches of rain had already fallen at Houston's Intercontinental Airport as of 3 a.m. CDT Tuesday, according to an AccuWeather report, while nearby locations received over 6 inches of rainfall. 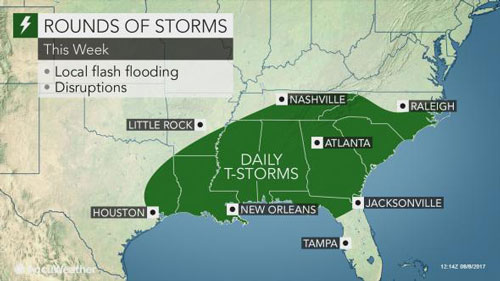 The slow-moving storm brought flash flooding to the Houston and surrounding areas, as well as San Antonio and Llano, Texas, which saw 2.5 inches and 7.52 inches of rain respectively. 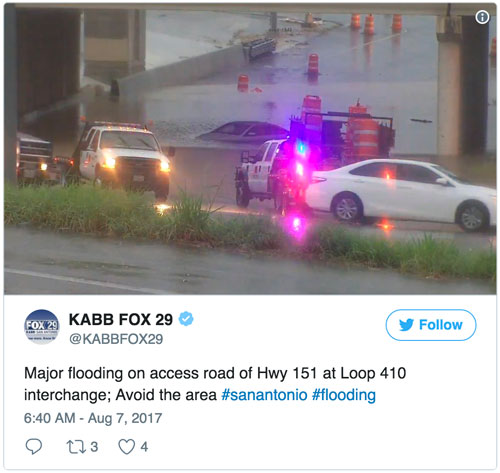 The downpours have also affected New Orleans and added to the already broken rainfall record in Gainesville, Florida, which has seen a total of 34.60 inches of rainfall from June to August 4. High temperatures that are usually in the 90s F will be held in the lower to middle 80s, kept at bay by the increase in thunderstorms, with the exception of the Florida Peninsula. 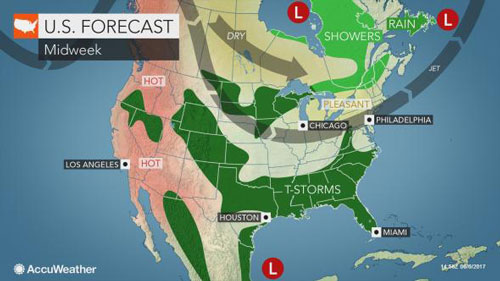 While the storms do not look to be affecting Texas growing regions further south, the report cautions that airline flights could encounter delays. Further east, slower-going transit along interstates 10, 20, 30, 40, 55, 65, 75, 85, and 95 could also occur.

AndNowUKnow will continue to track natural influencers that could affect the produce industry.