UNITED STATES - “It’s a big job. No, it’s a huge job,” LGMA’s CEO Scott Horsfall says, as we look toward the future of food safety in the nation’s farming industry. With the FDA’s final Produce Rule going into effect, the LGMA sat down with California Department of Food and Agriculture Secretary, Karen Ross, to discuss the implementation and impact of U.S. standards under the FSMA for the growing, harvesting, packing, and holding of produce for human consumption.

“Secretary Ross shared with us her hope that FDA will not attempt to ‘reinvent the wheel’ but that the administration will align with what is already in existence—processes that have shown to result in strong compliance in the state of California,” Horsfall adds.

With the rule published late last year, the work now begins as states begin to put these new laws into effect. As Secretary Ross looks toward the next round of dialogue with the FDA she reflects on the new Produce Rule and what is to come. 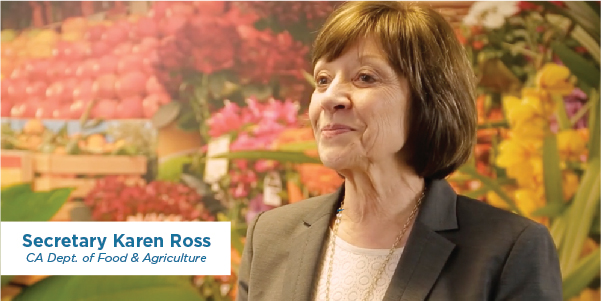 “It is a program that was really created at a time of crisis, but it was a very smart program to put together by partnering with government to really make sure that we are putting together a program that is effective and has the highest standards possible,” Secretary Ross says. “This program relies on the oversight of the Department of Food and Agriculture and government auditors who are certified by the U.S. Department of Food and Agriculture. It is a very strong and effective program. I am very proud of what the industry did by sitting down and partnering with government and I am sometimes overwhelmed by their commitment to the rigor of the audit process that we have the metrics that are in place.”

To see the full interview with Secretary Ross on the Food Safety Dialogue please view below:

In a recent POLITICO article, cited by LGMA, it was estimated that in California alone there are more than 23,000 produce farms that will need to be brought into compliance under new federal laws.

Currently on a national level, the costs for government agencies to verify that these farms are complying with the new rules are currently unknown, according to LGMA. 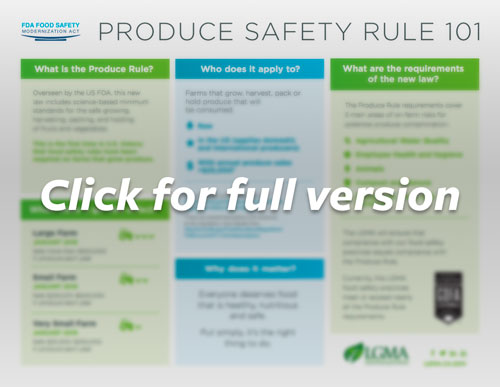 “But it is possible that the expenses will far exceed what is currently appropriated by Congress,” Horsfall adds. “The FDA is turning to state departments of food and agriculture to assist in getting this difficult job done.  For the leafy greens grown in California and Arizona, our LGMA system works to verify through mandatory government inspection that a set of science-based food safety practices are being following on leafy greens farms. These practices have been compared to the new Produce Rule and in almost every area, the LGMA metrics meet or exceed the requirements under that rule.”

LGMA members are audited approximately five times per year by qualified and trained government auditors, according to Horsfall, members must 100 percent compliant with all 180 checkpoints which comprise each LGMA audit.  The system is also paid for through LGMA assessments without the need for additional taxpayer dollars.

The beliefs of the LGMA and Secretary Ross are one in the same, that the LGMA program will allow both FDA and Ross’ department to demonstrate early success toward the goal of full implementation of FSMA.

To Learn More About the FDA’s Produce Rule Click Here