Lidl Holiday Campaign Calls for Consumers to Vote on Prices

UNITED KINGDOM - As price wars continue to rage across key retail markets here and abroad, Lidl is embarking on a holiday strategy that puts the tags in the hands of the consumers.

The German-based retailer launched a new U.K. campaign called the Social Price Drop this morning, Nov. 22, well-named as it asks consumers to vote on select items’ prices during the holiday season via Twitter. 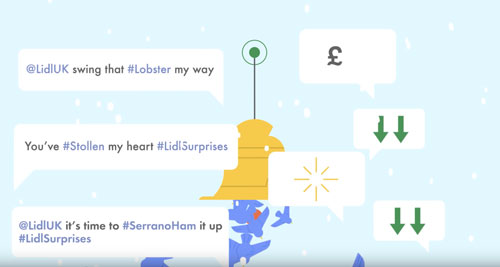 “Today’s launch of the Social Price Drop is a first for any supermarket in the U.K., and we’re incredibly excited about giving our customers the power on Twitter to lower the price of some of our finest festive products,” said Georgina Hall, Head of Communications at Lidl U.K., according to source, The Drum News.

The campaign follows a special focus on fresh produce in stores over the holidays, according to the report, and will flag socially-driven price cuts with special price tickets.

Lidl, known as a discount grocer, has been working to further its footprint both in the U.K. and in the U.S., where its plans a sizeable store launch come 2018.

This Christmas, the more you tweet, the more the price drops. So get tweeting...! #LidlSurprises Learn more here: https://t.co/wEtE7YhrEz pic.twitter.com/9kPpKktolo

Could this strategy from the rapidly-expanding retailer spark a holiday trend for others looking to hook cost-conscious, Twitter-savvy consumers?

Lower prices is a key focus for many of the big names in grocery; Walmart, Kroger, and Amazon have all been named in recent months as banners focused on providing the best price range for fresh items and beyond.

The campaign also comes with celebrity backing, enlisting cast members from popular TV shows to fuel the Twitter conversation, but it is giving consumers control, Hall said, that really drives the move.

Love this! The more you tweet #LidlSurprises #Lobster the more the price drops in store! @LidlUK #ad https://t.co/2Dh7ejtu05

“Christmas is a very expensive time of year for shoppers up and down the country, and as a retailer at the heart of Britain’s communities, our ambition is to put the control back into the hands of consumers, and save them even more in the run up to Christmas,” Hall said.

With Europe often sparking buy-side and consumer trends, it will be interesting to see if this sets in motion similar social media moves in Stateside markets and more.