PROVIDENCE, RI - Giant gourds are a halloween staple in produce publishing, and a grower from Rhode Island has made his mark in the practice with his latest accolade: a record-breaking green squash weighing in at 2,118 pounds.

The victory was a necessary notch in an even more decorated belt for Joe Jutras, with news source The Virginian-Pilot reporting him as the first in the world to achieve the trifecta in giant veggie growing hobbies. He now holds titles for heaviest pumpkin, longest long gourd, and heaviest squash.

"It feels great," Jutras said Monday, according to the news source, after a decade of working towards the trifecta. "It's really been a goal of mine to try to achieve this." 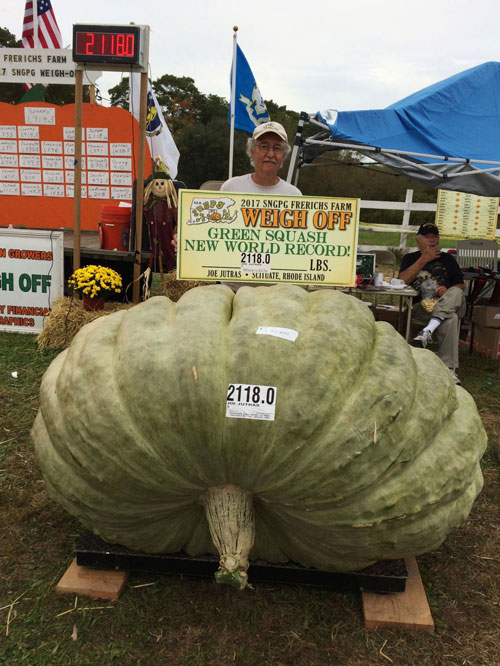 In 2006, he broke the record for longest gourd with a 126.5-incher, and in 2007 his fruit weighing 1,689 pounds broke the record for largest pumpkin. Both have since been surpassed by others, but the news source noted that Jutras is the only grower so far to break world records in three of the most competitive categories.

The victory was recorded at a weigh-in at Frerichs Farm in Warren on last weekend, and the winning gourd is now headed to The Big Apple to be displayed in the New York Botanical Garden this month.

What is his secret? Apparently a new soil cultivation technique, as well as having used a seed from last year's world record breaker. But, the closure of this dream is far from the conclusion of his giant growing goals as he looks to break the bushel gourd limit.

"I think the record now is about 279 pounds," Jutras said. "That might be something I might want to get into a bit."

For now, he'll receive a coveted "green jacket" honor for his squash record come February at the annual convention in Oregon of the Great Pumpkin Commonwealth.

Congratulations to this talented grower, may you continue to set new boundaries for produce.