SAN DIEGO, CA - Last week, border patrol officers stationed at Otay Mesa encountered a suspicious jalapeño transport. What they found inside is considered a hot commodity in the U.S.—and I’m not talking about the peppers. Amongst the produce shipment, officers discovered 314 large, wrapped packages of marijuana, weighing 7,560 lbs, and valued at $2.3 million.

“I am proud of the officers for seizing this significant marijuana load,” Port Director, Rosa Hernandez, told US Customs and Border Protection. “Not only did they prevent the drugs from reaching our community, they also prevented millions of dollars of potential profit from making it into the hands of a transnational criminal organization.” 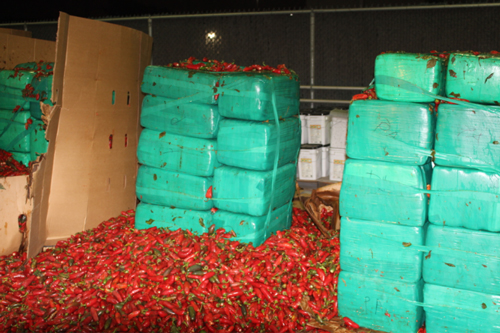 The shipment was driven by a Mexican citizen operating a tractor that pulled a trailer containing the cargo. Officers subjected this vehicle to a secondary search, where the canine team alerted them to the drug. The shipment was searched until officers broke open a package stuffed with an oregano-esque substance (though I’m sure they guessed it wasn’t oregano). Followed by prompt testing of the substance, officials confirmed the presence of marijuana and seized the vehicle. This bust follows another recent marijuana seizure, where 10,642 lbs were discovered in a shipment of plastic auto parts on August 13th.

Stick with us at ANUK for more on drugs amongst produce.