OAKBROOK, IL - In an effort to expand its use of locally-grown produce, McDonald’s is now adding its Gilroy Garlic Fries to nearly 240 of its Bay Area locations. After a successful test at four restaurants earlier this year, participating McDonald’s restaurants will have a gradual rollout of the new product, which will be available by July 27.

“McDonald’s Gilroy Garlic Fries is a unique, regional offering that is tailored to Bay Area tastes,” explained Nick Vergis, Co-op President of the company in the San Francisco Bay Area. “The innovation of this new menu item is due in large part to our local franchisees and their commitment to providing food our customers want.” 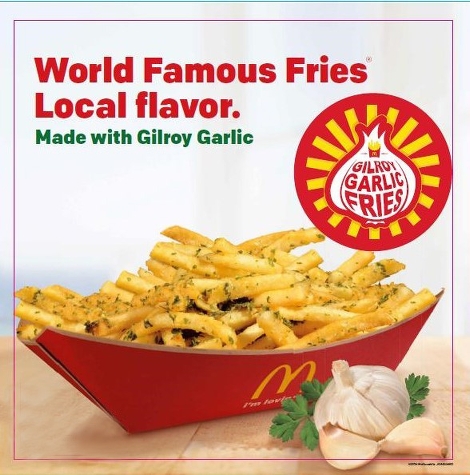 The garlic used by McDonald’s is grown in the Santa Clara Valley, approximately 80 miles south of San Francisco in Gilroy, California. Garlic lovers and Bay Area residents may already know the city is commonly referred to as, “The Garlic Capital of the World.” Made-to-order in each kitchen, the product is made by tossing French fries with a purée mix of garlic from Gilroy, California’s Christopher Ranch. Other ingredients in the Gilroy Garlic Fries include olive oil, parmesan cheese, parsley, and a pinch of salt.

According to a press release, the fries themselves are made with North American-grown potatoes that include Russet Burbank, Ranger Russet, Blazer Russet, Ivory Russet, Umatilla Russet, and Shepody.

As we previously reported, McDonald’s entirely sold out of its Gilroy Garlic Fries the first week it was made available. Will this larger launch see similar success? And will it prompt McDonald’s to venture into other locally-grown produce options? Only time will tell, but AndNowUKnow will be sure to update you.