NOAA Cancels La Niña Watch: Could The Blob Have Helped?

CALIFORNIA - It seems that the NOAA has joined the ranks of those no longer expecting a La Niña winter. It has canceled its watch for the seasonal pattern that was in place the last several months.

Typically peaking between December and February, La Niña is associated with dry winter conditions that would deter any progress the West Coast might have made during the El Niño events of last winter. 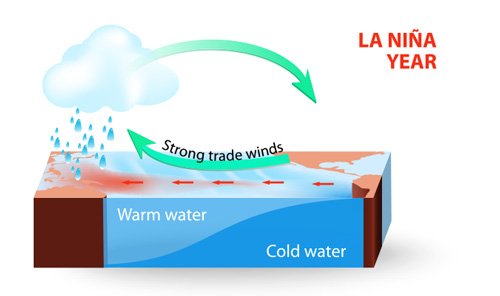 As we reported previously, the Climate Prediction Center (CPC), a subsect of the National Weather Service, released a monthly forecast also predicting La Niña is no longer likely to occur, despite last month’s statement that La Niña conditions were favored to occur with a 55-60 percent chance.

Those have slipped down to the 40 percent level, according to The Weather Channel, leaving room for the possibility but removing any expectations.

In an interesting turn, the anomaly brewing off the West Coast, fondly known as The Blob, could be a contributing factor shielding California from La Niña conditions.

“These are really strong anomalies,” Art Miller, Head of the Ocean and Atmosphere section at UC San Diego’s Scripps Institution of Oceanography, told the San Diego Union Tribune. “They’re far larger and more persistent and spread out over larger areas than we think we’ve ever experienced.”

So what’s in store for us this winter? Despite predictions of much needed moisture from the Farmers Almanac, it is still too soon to tell.

“El Niño was a dud for Southern California rainfall, so maybe a wannabe or puny La Niña could deliver a much needed wet winter,” Bill Patzert, Climatologist with NASA’s Jet Propulsion Laboratory, said.

As we continue to look toward possible drought reprieve, and measures taken in its place, keep checking in with AndNowUKnow for all the latest in weather and other industry influencers.