WASHINGTON, DC - Some relief may be on the way for farmers who have been hit hardest by the emerging trade war between the United States and its trading partners. An aid package of $12 billion will use existing funding to lessen the estimated $11 billion impact of tariffs other countries have imposed on U.S. agricultural products. 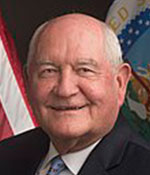 “This is a short-term solution that will give President Trump and his administration time to work on long-term trade deals to benefit agriculture and all sectors of the American economy,” Agriculture Secretary Sonny Perdue stated to reporters.

When Trump announced that the U.S. would impose $50 billion on Chinese imports, the Chinese government shot back with tariffs of its own on a variety of agricultural products. Other U.S. trade partners such as Canada, Mexico, and the European Union have also issued tariffs against U.S. agricultural goods, and farmers are starting to feel the impact.

Although Republicans on Capitol Hill did not directly criticize the President, some have spoken out against Trump’s tariff strategy, suggesting that the administration drop the imposed tariffs rather than roll out an aid program.

Sen. Rand Paul, R-Kentucky, tweeted, “Tariffs are taxes that punish American consumers and producers. If tariffs punish farmers, the answer is not welfare for farmers—the answer is remove the tariffs.”

"This trade war is cutting the legs out from under farmers and White House's 'plan' is to spend $12 billion on gold crutches," Sasse said in a statement. "America's farmers don't want to be paid to lose—they want to win by feeding the world. This administration's tariffs and bailouts aren't going to make America great again, they're just going to make it 1929 again."

As the trade battle continues, AndNowUKnow will report the latest.