LOS ANGELES, CA - Following a week of triple-digit-heat, Southern California and parts of Northern California are finally starting to feel like September. Californians can thank Hurricane Linda for this new burst of rain, wind, and fall temperatures in the state.

“On again, off again rain, probably [Tuesday] morning will be the best chance of rain for the LA area and that will last us through [Tuesday] afternoon,” said National Weather Service (NWS) Senior Meteorologist Andrew Rourke. “Looking at maybe a half inch although, honestly, we’ve been fooled by these systems before and sometimes you get a little bit more rain than you think.” 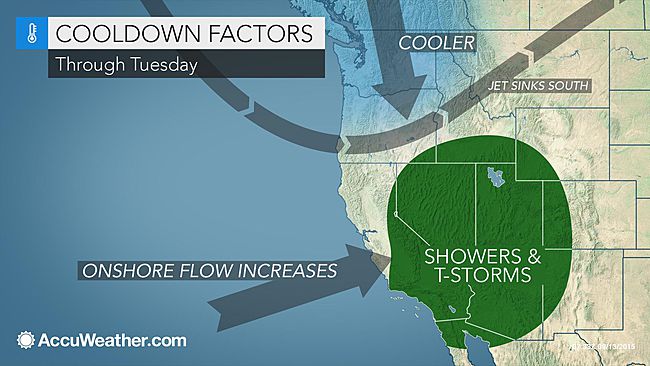 From Monday through early Wednesday of this week, Hurricane Linda, which formed off of Baja California’s coast, will bring moisture as far north as the Central Valley. The trajectory of the storm system is still up in the air, but National Weather Service forecasters said coastal slopes and foothills will experience the highest rainfall amounts.

Rain will fall across portions of Southern California, reaching possible totals nearing 1 inch. It should be noted, however, that even with this amount of rain California’s drought will continue.

“Since many areas have seen little or no rainfall in the past couple of months, buildup of oil on the roadways could lead to extra slippery driving conditions” once the rains begin, said a statement from the NWS. Furthermore, “minor urban roadway flooding will be possible in Los Angeles County, which could be worsened by clogged storm drains and culverts.”

While the drought may still be in full force for the state after this quick storm, at least those people and crops who love cooler temperatures will be happy. AccuWeather reports temperatures will range from the 80s in the Central Valley to the upper 70s along the Coastal Ranges.

Stay tuned to AndNowUKnow as we report any further updates.