Mississippi Valley - Violent winds on Monday and thunderstorms brewing this morning may signal tornadoes throughout the Mississippi Valley later today. According to AccuWeather, severe storm warnings are in place with damaging winds, localized flash flooding, and isolated tornadoes expected.

"The most likely time for a tornado to spin up will be from 5 p.m. to 11 p.m. local time," stated AccuWeather Meteorologist Brian Thompson.

Though a lack of humidity limited Monday’s weather to strong gusts of wind, a surge of warm humid air could result in tornadoes and flooding this evening. Risk of tornadoes will extend from central and eastern Louisiana, to western and central Mississippi and southwestern Tennessee—including major cities like Baton Rouge and Monroe in Louisiana, and Jackson and Tupelo in Mississippi.

Tornadoes could touch down for several minutes and the formations may be wrapped in rain, making them more difficult to see. Additionally, much of the dangerous weather is expected to occur after dark, increasing the potential danger. 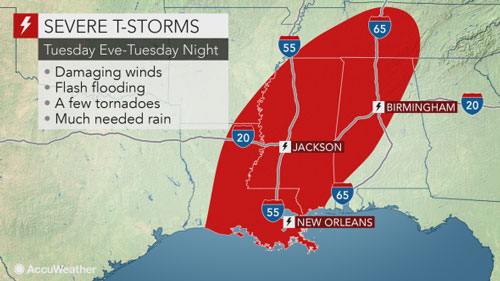 "As the isolated severe storms move eastward, they will likely form into a squall line," Thompson said. "Once this happens, the main threat will shift from tornadoes to damaging wind gusts on a more regional basis from southeastern Louisiana to Alabama and central Tennessee."

Cities that could be affected by severe storms and flooding overnight include Nashville, New Orleans, and Birmingham, Alabama.

Thompson did note one potential silver lining from this storm front: "While the severe weather and flash flooding threat certainly are not good news, the rain will fall in areas of exceptional drought that have not received much rain during the past few months." 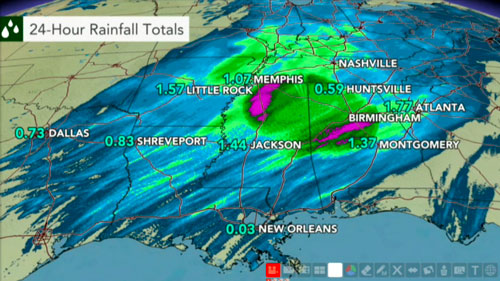 The violent storms over the Mississippi Valley will likely subside throughout Wednesday, though a few localized thunderstorms may spread as far as northern Florida and New York state.

For more on severe weather with the potential to impact our industry, stay current with AndNowUKnow.