Kevin Fiori, Russell Hanlin, Leland Wong, Julie DeWolf, and Joan Wickham from Sunkist were featured in the latest edition of AndNowUKnow’s print publication, The Snack Magazine. These citrus all-stars all sat down to give us an exclusive in-depth look behind the scenes of Sunkist and the company's family values.

If you have never heard of this African proverb, you’re not alone. But Kevin Fiori, Vice President of Sales and Marketing for Sunkist Growers, will tell you that it’s more than just a simple motto. All of Sunkist’s core values are embodied in this philosophy.

“We were founded because, at our core, we believe we can accomplish much more working together than any one individual can accomplish alone,” he tells me. “When we work together and are open to ideas from all areas of our organization, we create opportunities to innovate and to identify unique solutions to drive the business forward.” 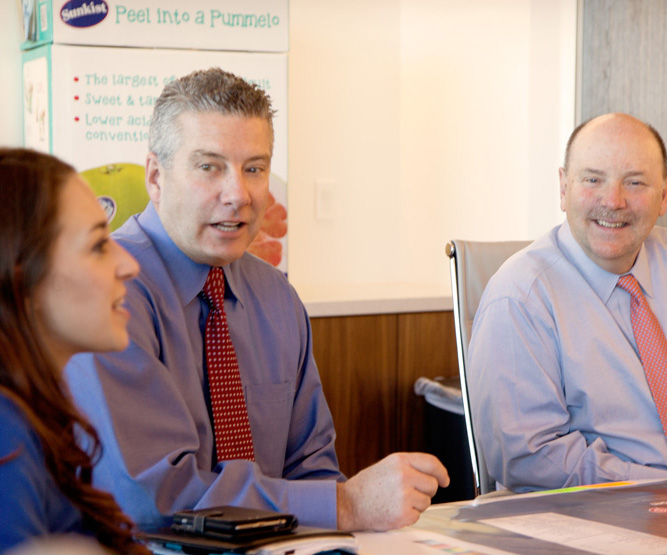 Looking back at the company’s history, I always find myself returning to a common theme: Family. That should be no surprise, considering that Sunkist’s culture is one of collaboration and teamwork. Phrases like “Sunkist’s legacy” and “multigenerational” quickly help me realize how fondly the organization looks upon its history. It’s a stepping stone towards the future. When Fiori says Sunkist is all about putting together a mutual effort to drive the business forward, he means it. It’s this kind of cultural philosophy that not only propels the brand to greater heights, but its employees as well. 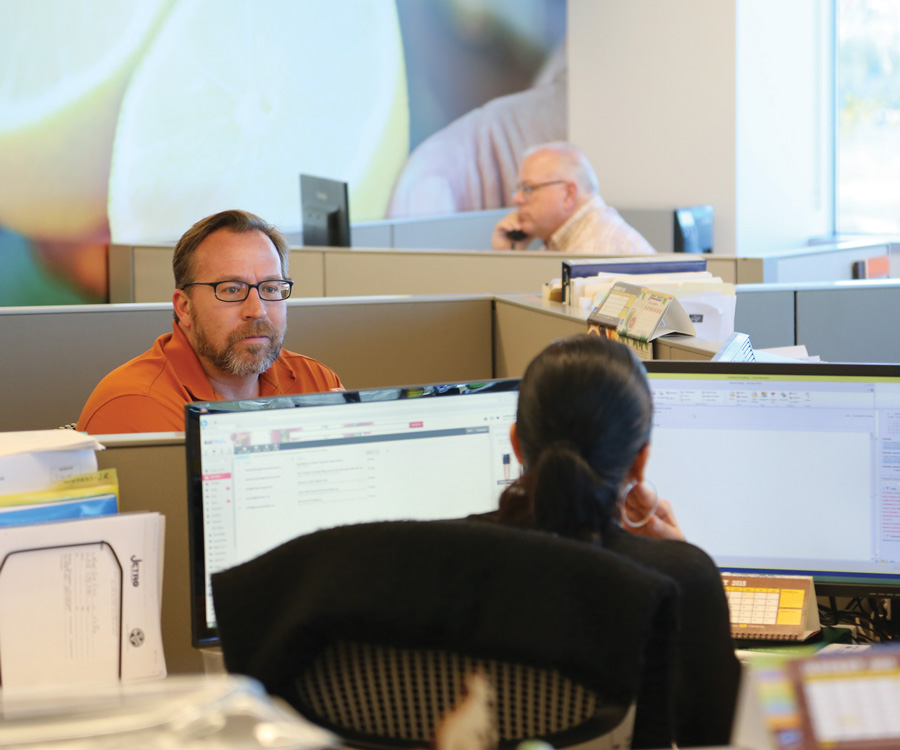 Sunkist has embarked on a number of strategic initiatives that will position the company for long-term success. One of the most significant changes came in 2014 when the company announced plans to move its headquarters from Sherman Oaks to Valencia, California. The impetus behind such an undertaking was motivated by Sunkist’s family of growers, the heart of its business. If you want to know how Sunkist’s relationships with its growers have influenced its history over the years, look no further than its new headquarters.

"The new space is designed to tell the story of Sunkist, communicating the rich history of the cooperative."

“The new space is designed to tell the story of Sunkist, communicating the rich history of the cooperative while also highlighting the current and advancing business,” says Joan Wickham, Advertising & Public Relations Manager. “Rich imagery and multimedia showcase what the Sunkist brand stands for: our rich history of multigenerational family growers, innovation, environmental stewardship and sustainability, commitment to quality, and core values.” 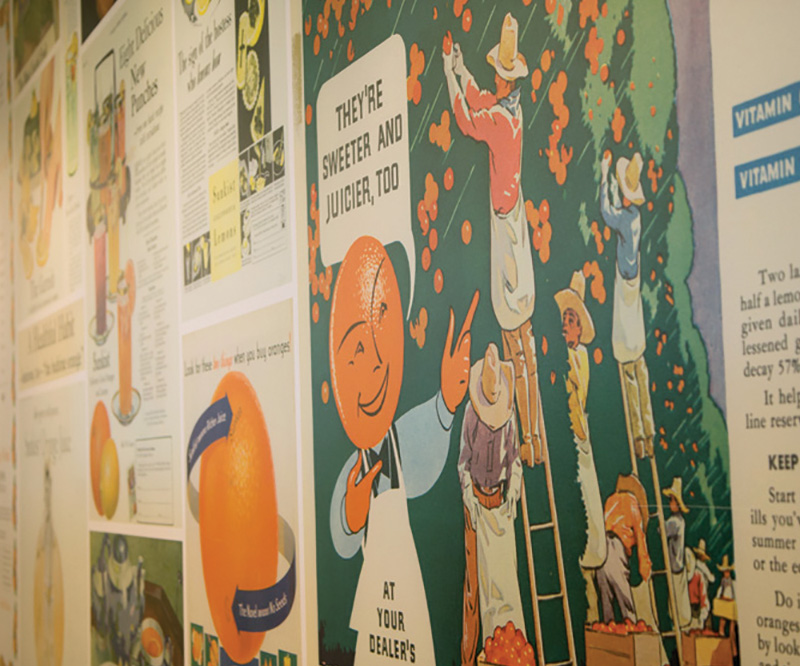 Sunkist’s new home is modern, clean, and fresh. It features wide open spaces with plentiful natural light, bringing brightness into the workspace. Just as the look and feel of the space has been updated, so has the technology. Multimedia screens incorporated throughout the building display the company’s latest digital strategies – from its Sunkist Family Stories video series to a live Twitter stream of its social media content. The meeting areas have also been outfitted with cutting-edge audio-visual technology to allow Sunkist to better exhibit its current marketing and sales tools and stay connected with its customers and partners around the world. 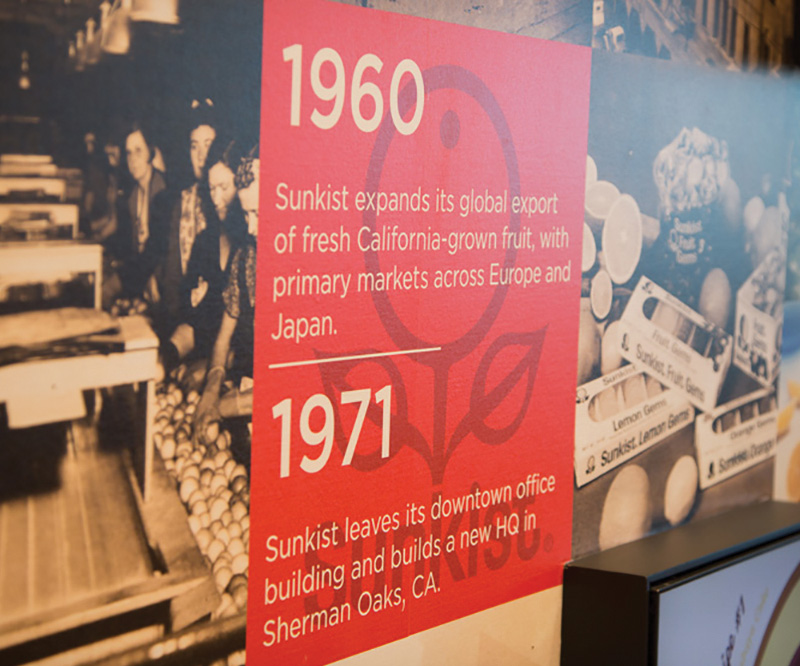 You can tell how proud the company is of its heritage just by looking at the Sunkist Family Stories project. Sunkist Family Stories is a multimedia storytelling project designed to share the powerful tales of the organization’s family farmers with trade customers and consumers. A dedicated consumer microsite, social media campaign, and retail marketing materials help transport customers and their consumers to the sunny groves of California and Arizona to learn more about the traditional growing practices, stewardship of natural resources, and dedication to innovation that is proudly passed through generations of Sunkist member family-owned farms – year after year, crop after crop.

“Our customers and consumers have embraced the project, and we plan to not only continue consumer promotion of the grower content, but also roll out retail marketing materials to help our customers bring Sunkist Family Stories to life in their stores this season,” said Julie DeWolf, Director of Retail Marketing.

Alongside its hugely successful Sunkist Family Stories program, the company has also launched a host of new packaging designs and display bins to further engage with the consumer. As part of PMA and Sesame Workshop’s “eat brighter!” program, Sunkist has unveiled new Sesame Street-themed packaging for its 10-pound Navel orange carton and polybag, as well as a Giro-bag for kid-favorite mandarins, all featuring the lovable Sesame Street characters. In addition, the company has also developed a new display bin to help retailers generate excitement about the largest citrus fruit, the pummelo. 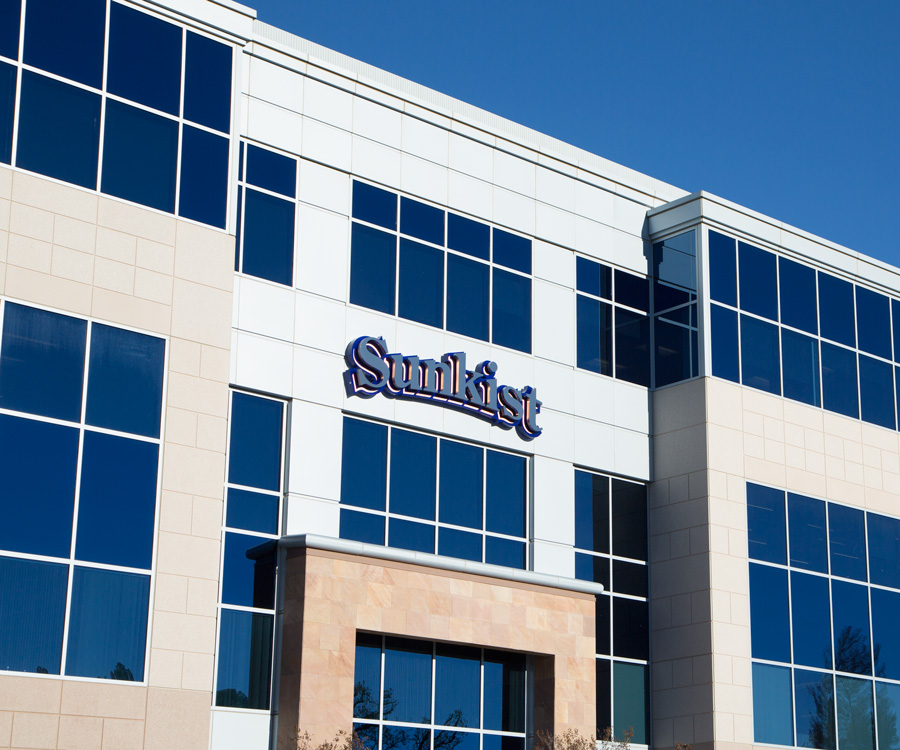 Sunkist’s efforts to educate consumers about the nutritional benefits and versatility of citrus don’t start and end with its new packaging and display options. Initiatives such as “S’alternative” and the “Not Your Mother’s Grapefruit” campaign have increased citrus consumption, especially among millennial shoppers looking for diverse nutritional options.

“Our S’alternative initiative encourages consumers to reduce their sodium intake by using fresh lemons to flavor their food in place of salt,” said Leland Wong, Director of Marketing. “Recently, we released research in conjunction with chefs from Johnson & Wales University that concluded that lemons can be used to reduce salt by as much as 75 percent without sacrificing flavor.”

“Research has indicated that millennial women are increasing grapefruit consumption, and Sunkist is leveraging this trend by introducing modern uses for grapefruit with the ‘Not Your Mother’s Grapefruit’ campaign, aimed at reigniting the fruit’s popularity by educating younger consumers about this delicious, nutrient-rich superfood,” said Wickham.

With Sunkist’s latest retail initiatives already well underway in 2015, we come back to the bigger picture at hand: Family. Over a decade ago, Sunkist celebrated its first billion dollar year. It’s a feat that continues to leave its mark on every employee on the Sunkist team, but it’s not something its executives like to brag about. Instead, they’d rather put the spotlight on its California and Arizona citrus growers, the ones who band together to produce high quality fruit each and every year.

President and CEO Russ Hanlin says it best - “At Sunkist we are truly a family, and as such, we invest in our employees for the long term. We do this to ensure their and the company’s long-term growth, development and success.”

I couldn’t agree more. By putting family first, Sunkist is on the path to an even brighter future.

Sunkist is an agricultural marketing cooperative entirely owned by and operated for the California and Arizona citrus...