UNITED STATES - As millions of Americans begin to pack their bags for one of the biggest days of the year for home-cooked meals, Mother Nature is looking to throw a few curve balls.

"The greatest chance of some direct and significant travel impacts through this week and during much of Thanksgiving week will be from the I-70 corridor on north to the Canada border," reported AccuWeather’s Lead Long-Range Meteorologist, Paul Pastelok.

But, regardless of calm weather on either end of travel locations, it seems inclement weather at other airports could displace aircraft and crews, leading to delays or cancellations. 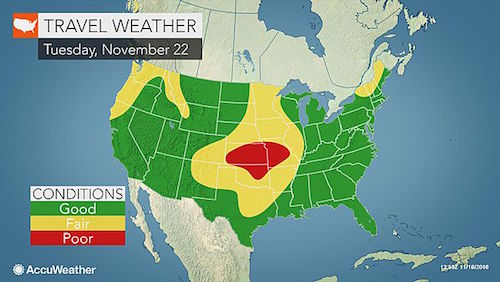 Both air and ground travel could see delays across the board, with a storm pattern that will offer disruptive winds and snow in some areas, and come into the eastern side of the country as early as this weekend.

“The first true blast of much colder air could bring the first snowfall of the season from the Great Lakes to the central Appalachians during Saturday night and into Sunday," said AccuWeather Senior Meteorologist Henry Margusity in a recent report.

Potential strong winds will hinder high-profile vehicles on highways, and cause airline delays in some of the nation’s busiest areas, including:

On the West Coast, Sunday night and Monday will see a storm bearing rain for the I-5 corridor that could extend as far as Los Angeles and San Diego. 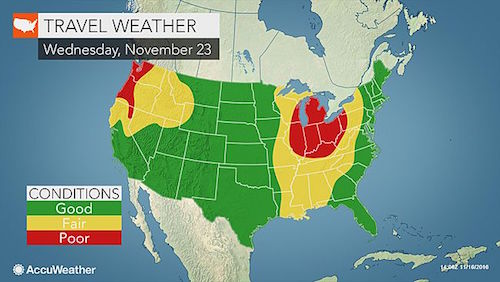 In the north, it could mean snow for the Intermountain West with some rain over the interior Southwest, including the Phoenix area, late Monday.

"Fog is also a potential threat to ground and air travel with the storm as it pushes from the Midwest to the East spanning Wednesday and Thursday," said AccuWeather Chief Meteorologist Elliot Abrams.

By midweek, the delays could extend to travel hubs like:

Upwards of 48.7 million Americans will travel 50 miles or more between Wednesday, November 23, to Sunday, November 27, according to the American Automobile Association, making for some of the biggest numbers since 2007.

If either you, or your cargo, plan to be in transit during this busy time, continue to follow developing weather patterns as they may continue to change.

And, from all of us at AndNowUKnow, stay safe as you enjoy the holiday!