EDEN PRAIRIE, MN - A shift towards its Wholesale division has translated into success for SuperValu, which reported its Q1 financial results this morning. A double digit increase in net sales in Wholesale gave the company’s shares a healthy boost as the numbers hit the desks of investors, allowing for a nearly 10 percent jump over yesterday’s share prices.

“The results generated this quarter by our Wholesale business were outstanding and demonstrate our ability to deliver on our strategy and commitment toward growing this segment,” commented President and CEO Mark Gross.

In total, Wholesale net sales for SuperValu shot up to $2.56 billion this quarter, a 12.4 percent increase over Q1 2016. According to a press release, this increase is in large part thanks to an influx of new customers and expanded sales to its existing customer’s new stores. This translated to a 8.92 percent jump in stock prices, landing the company at 3.54 a share as of 1:00 p.m. EST. 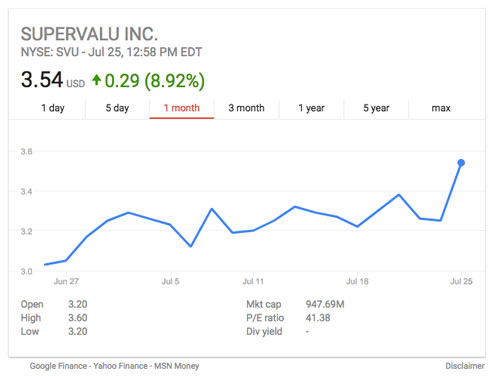 SuperValu has been making a concentrated effort to expand its wholesale operation in recent months, selling its Save-A-Lot retail banner for over $1.3 billion dollars, and recently acquiring Unified Grocers, which will begin impacting the company’s Wholesale division sales come next quarter.

“We’re thrilled that we closed on the acquisition of Unified Grocers shortly after the end of our first quarter, and we’re now working together as one team to drive the business and integration efforts forward,” Gross added.

As for the retail side of SuperValu’s business, net sales decreased 2.7 percent, down to $1.39 billion compared to $1.43 billion in Q1 2016. Ramping up its fresh food offerings, including fruit and vegetables, has been an increasingly important strategy for increasing retail sales, it seems. Just last month, SuperValu announced it would be remodeling several of its Cub Foods banner stores focusing on expanding produce departments, increasing the number of organic options, and building on its selection of value-added fruits and vegetables.

Additional highlights in SuperValu’s report include:

More information of the company’s quarterly earnings is expected to be revealed in a conference call between SuperValu and its investors today at 9:00 a.m. CT, so check back with AndNowUKnow for updates.