HOUSTON, TX - Sysco has released its Q4 and fiscal year 2016 financial report this morning, not only beating Wall Street’s estimates on earnings, but also increasing sales by double-digits on a year-over-year basis.

“I am very pleased with our performance during fiscal 2016, as we made significant progress toward our three-year plan financial objectives,” shared Bill DeLaney, Sysco’s Chief Executive Officer, upon the release of the report. “During the year, we had strong local case growth, improved our gross profit, managed expenses well, and drove increased operating income. Looking forward, we remain highly focused on supporting the success of our customers, profitably growing our business, and achieving the objectives of our three-year plan.” 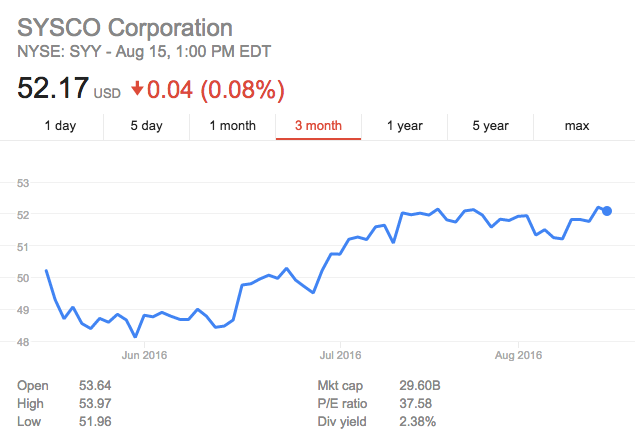 Prior to the report, analysts at Nasdaq had estimated the company's non-GAAP earnings per share to reach 60 cents, which Sysco beat to reach 64 cents per share. This win had Sysco’s shares up by 5% in pre-market trading, Nasdaq reports, but by 1 PM EST stocks had leveled out to near even, hitting $52.17.

Other highlights from Sysco’s Q4 and fiscal year 2016 included:

On the tails of an abandoned merger between Sysco and US Foods, Sysco recently closed a $3.1 billion acquisition of U.K. distributor Brakes. This reportedly grew sales by 10%, reaching $13.6 billion.

How will fiscal year 2017 look for a thus far thriving Sysco? AndNowUKnow will keep dishing up the latest.