As we reported earlier this week, Earl has been moving from just southwest of Jamaica, and westward over the Caribbean as the week progresses, according to AccuWeather, continually getting stronger and bringing heavy rains, strong winds, and flooding.

While it was originally predicted that Earl wouldn’t grow to become a hurricane, the Weather Channel reported that it was elevated to a Category 1 yesterday, August 3, off the Honduran coast, and should landfall in Belize today. 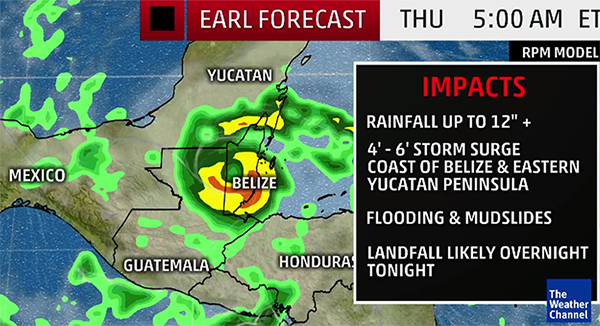 Currently, hurricane warnings are in place up to Punta Allen, Mexico, though Cancun and Cozumel are excluded.

Earl is expected to continue through to eastern Mexico this weekend, but “rain itself out” there, according to the report, having already brought 8-12 inches of rain to the following areas:

While Earl is looking to keep away from the U.S., its effects may be felt in parts of South Texas this weekend. Some increases rain and higher surf could be seen this weekend as far north as Galveston, TX.

AndNowUKnow will continue to follow and report on the pattern, and any possible influence it could have on the produce industry.