GULF OF MEXICO, TX - A newly formed tropical storm is traveling from the Gulf of Mexico to Texas, bringing with it warnings of locally heavy rain and strong coastal winds. Tropical Storm Hanna is estimated to make landfall in the Lone Star State tomorrow, July 25, according to The Weather Channel (WC).

The largest factor to look out for, both for residents and produce or transportation, is the threat of heavy rain, which the report said will begin today via showers and thunderstorms in Texas, as well as the coasts of Louisiana and Mississippi.

While the bulk of this will be for the coastal areas, WC warns that, like most tropical cyclones, this will not be exclusively seaside. 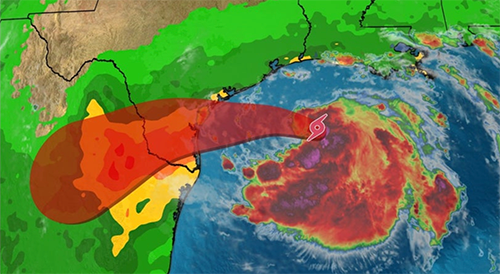 Primary warnings for heavy rain are predicted to spread from South Texas into parts of northeast Mexico, likely falling through Sunday, possibly into Monday, with potential rainfall of up to 5 inches.

Dangerous flash flooding and some river flooding, particularly in the mountainous terrain of Northern Mexico, were noted. To follow the patterns, click here.

Some minor storm surge was reported to be expected from the Mexican border north to High Island, Texas, including Corpus Christi Bay, Matagorda Bay, and Galveston Bay.

AndNowUKnow will continue to watch and report on Hanna and other weather patterns pertinent to the produce industry.