Trump Reassures Farmers that Immigration Reform Will Not Have Negative Impact

WASHINGTON, DC - With an ever increasing concern about immigration laws, deportation policies, and potential tariffs among our industry, Reuters recently reported that President Donald Trump and Agriculture Secretary Sonny Perdue sat in on a meeting to reassure produce providers that his stance on immigration reform will not harm the industry.

Last month, according to Reuters associates Mica Rosenberg and Kristina Cooke, the President held a roundtable to address some of the understandable concerns from around the agricultural industry—the details of which have been previously unreported.

During the discussion, President Trump heard farmers apprehensions and responded that he recognized the industry’s need access to workers. While the source noted that the President called the meeting productive, the White House did not comment on the discussion.

According to Reuters, attendees shared their frustrations with the H-2A visa program, one of the only existing legal way to bring in temporary seasonal agricultural workers, and recounted that Americans are generally unwilling to perform these difficult farm jobs, as President Trump listened. 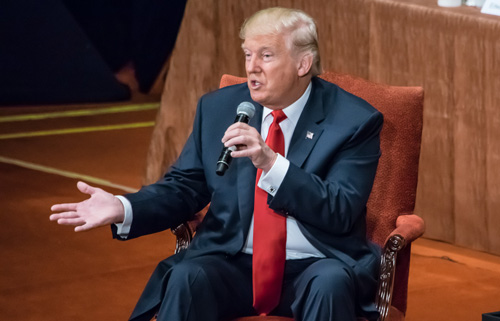 "He assured us we would have plenty of access to workers," said President of the American Farm Bureau Federation Zippy Duvall, one of 14 participants at the April 25 roundtable.

One attendee, Tom Demaline, President of Willoway Nurseries in Ohio, described his challenges with the H-2A guestworker program to the President, commenting, "I brought up the bureaucracy and red tape. If the guys show up a week or two late, it puts crops in jeopardy. You are on pins and needles all year to make sure you get the workers and do everything right."

According to the source, accounts of the conclusion said that Trump told attendees he wanted to help and asked Secretary Perdue to look into the issues and come back with recommendations. Other issues concerning the industry, like possible border taxation, were not reportedly addressed. Participants, however, were noted to have left the session feeling positive about the President's position.

How will President Trump continue to impact the agricultural industry? AndNowUKnow will continue to report.