According to Weather.com, the first storm is expected to last from late Wednesday to early Friday and will bring a powerful arctic cold front and light to moderate snow across the Northeastern United States. 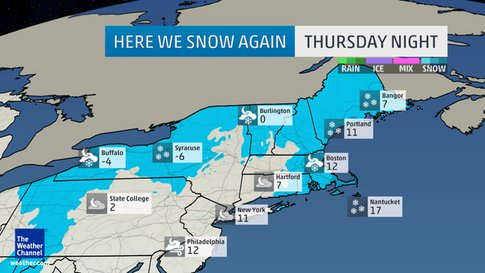 Meteorologists forecast that the biggest impact of this system will be the strong winds behind the arctic front that could lead to drifting snow.

Once that system passes, another storm is coming right behind it just in time for Valentine’s Day weekend. This system will also bring another arctic cold front and another stripe of snow. Some forecasts predict a possible 6-12 hour period of moderate to heavy snow, which could blanket New York City metro area and some of New England Saturday night and Sunday morning.

That snow could cause a major problem for Boston, where heavy snowfall has already caused about 20 roof collapses. The Boston Globe reports that the continuing snow, which has totaled to 78 inches as of this morning, has vaulted winter 2014-2015 into the top 10 snowiest in Boston’s recorded history. 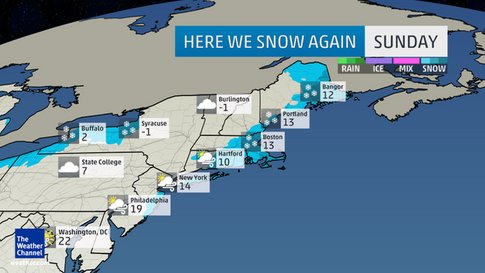 Behind the arctic front is bitterly cold air, driven by strong winds that could lead to dangerous wind chills and areas of blowing and drifting snow. Weather.com says that temperatures could remain stuck in single digits with lows possibly plunging below zero.

Stay tuned to AndNowUKnow as we continuing to track this developing weather system.