OTAY MESA, CA - Officers for the U.S. Customs and Border Protection (CBP) have once again stepped in to save the day when it comes to protecting our precious fresh produce. On March 10, 2021, officers at the Otay Mesa commercial facility foiled the plot of criminals to smuggle over $1.3 million worth of methamphetamine hidden with a shipment of produce.

“CBP officers continue to expedite legitimate trade and travel without letting their guard down when it comes to protecting our country,” said Rosa Hernandez, Port Director of the Otay Mesa Port of Entry. “We are aggressively combating the flow of illegal narcotics and preventing them to reach our communities.” 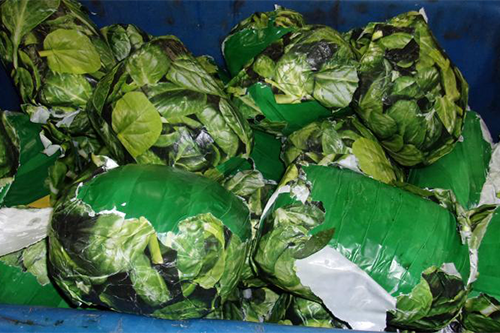 On Wednesday, according to a relase, officers encountered a tractor pulling a trailer with what appeared to be fresh spinach inside. As the inspection unfolded, CBP referred the trailer for X-ray imaging, during which anomalies were detected.

Upon further review and a canine team screening, detector dogs alerted to 127 packages of methamphetamine wrapped in images of spinach concealed within fresh spinach. The drugs that were removed weighed more than 580 pounds.

The driver of the tractor has been turned over to agents with with U.S. Immigration and Customs Enforcement, Homeland Security Investigations (HSI), and the tractor, trailer, and narcotics were seized by CBP officers.

Thanks to the efforts of these agents, our fresh produce remains safe from the hands of criminals for another day.