CALIFORNIA - After four years of historic drought conditions in the state of California, both residents and growers alike are constantly on the lookout for good news on the horizon. Now, following a bout of El Niño storms, California has seen some notable improvements as the state’s residents are observing the beginnings of a recovery.

The latest update from the U.S. drought monitor is showing that conditions in a large area of Central California, from around Sacramento to Fresno, have improved in just the past month of rains. As you can see in the images below, conditions as of April 19 are visibly improved from that of March 15. 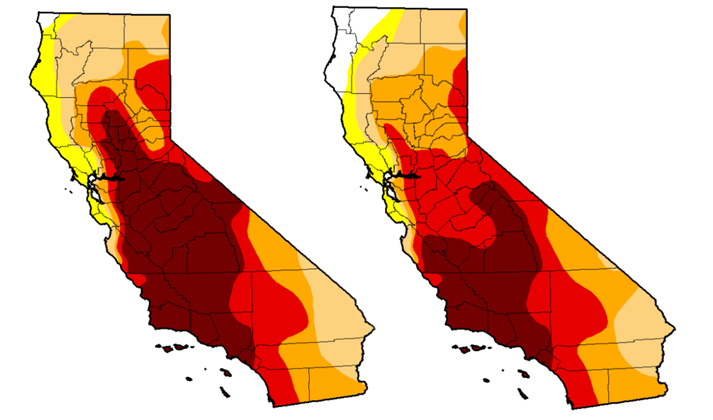 Under several classifications of drought, D4-Exceptional drought, is the highest. At the start of the current water measurement period for California, beginning in October, 46 percent of the state was rated at D4. This latest update from the U.S. Drought Monitor sees that level shrunk down substantially to 21 percent.

According to ABC News 10, that means more than 3 million residents in places like Stockton, Modesto, Fresno, and Tracy have seen improvement with the drought.

While this is definitely an accomplishment worth noting for the state, it's important to realize any long-term drought alleviation is still years down the road. As more information regarding the drought is released, you can count on AndNowUKnow to update you with the latest.