CALIFORNIA – Coming off the heels of a historically hot summer, California citizens may be in for a bit of a reprieve for this year’s winter, and if meteorologists are correct in their predictions, perhaps a positive impact on the drought as well.

The Climate Prediction Center (CPC), a subsect of the National Weather Service, has released a monthly forecast which predicts that La Niña is no longer likely to occur. According to Reuters, last month the CPC stated that La Niña conditions were favored to occur with a 55-60 percent chance of developing during the upcoming fall and winter. 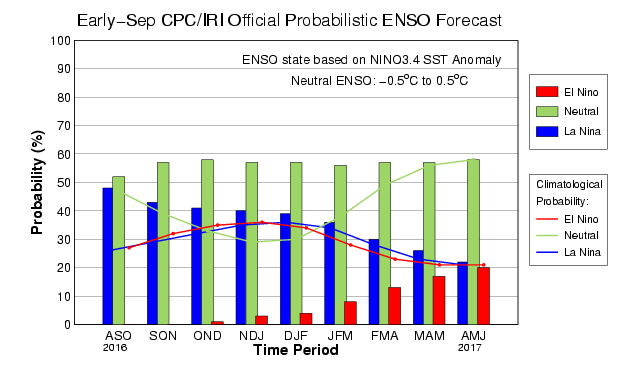 This news comes on the heels of the federal climate trackers at the National Oceanic and Atmospheric Administration (NOAA) declaring this record-breaking summer of high temperatures as the state’s hottest, then calling off its predictions for a La Niña-filled fall and winter as well.

So with NOAA reporting California temperatures at least 3.3°F above average during the dry, summer months, what does this mean for the ongoing drought?

KQED Science stated that with NOAA predicting there’s now a 55-60 percent chance that neither La Niña or El Niño will develop, the California drought could see no extensions to the drought's projected length as was previously expected.

Reuters also reported that no La Niña and its subsequent weather effects, could mean an easier winter for seasonal categories free from flooding and extended drought conditions.

Will weather agencies across the board continue their predictions of neutral La Niña and El Niño conditions, and will this provide better winter weather needed for California farmers?

Stay with AndNowUKnow as we continue to cover the situation.