LA CAÑADA FLINTRIDGE, CA – With the holidays upon us and this opportunity and ability to give to those less fortunate even more welcomed than ever, the Allen Lund Company is once again launching its support of Navidad en el Barrio, a program that the team has supported since 2004 and continues to support today.

“It's so wonderful to be able to provide fresh produce and meals to these families during the Christmas season," Nora Trueblood, Director of Marketing for the Allen Lund Company, stated. "The shippers and carriers we work with year-round are so generous."

“The produce and perishable items have been a huge addition to these meals and one that is incredibly appreciated,” Nora added. Allen Lund Company provides logistical support as well as produce donated by customers. “We have watched the program grow and gain traction more and more every year, and we are honored to be a part of such an impactful initiative.”

Through the efforts of Navidad en el Barrio, which was established in 1972 by former NFL kicker Danny Villanueva, over 75,000 people are served annually.

"My mom and dad instilled in us the value and importance of giving back, and we as a company completely embrace that concept,” Kenny Lund, Vice President of ALC said. “Navidad en el Barrio is such an important effort and one that we are able to actually see the impact by participating in the distribution of the dinners and meeting the grateful families." 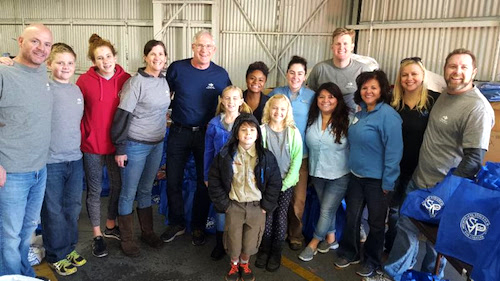 With long time supporters and new companies joining the cause, ALC has started the process of organizing donations of perishable products and food items from growers/shippers for the annual holiday food baskets.

"We are honored to be apart of this program again in 2017. For the fourth year in a row, Dayka & Hackett will be providing approximately 10,000 lbs. of grapes to the Navidad en el Barrio event," Mike Weaver, Table Grape Commodity Manager of Dayka & Hackett, shares with me. "It is a small gesture on our part to help spread holiday cheer."

Since 1972, Navidad en el Barrio has gathered and distributed food during the Christmas holiday to serve mostly Hispanic communities of Southern California, with the mission of providing a Christmas meal to families who very often feel marginalized and forgotten by our society, Nora adds. Navidad en el Barrio works with agencies throughout Southern California, from Ventura to San Diego, and including Riverside, San Bernardino, and Orange County.

“Rainier Fruit Company is pleased to join the Allen Lund Company and other grower shippers within Washington State in supporting Navidad en el Barrio,” Michael Clayton, Director of Logistics for Rainier Fruit Company, shares. “We have actively participated in this great cause serving the communities of Southern California since 2006. We would like to thank all involved and wish everyone a safe and joyous holiday season!”

With so many on board with the cause, Joe Esta, Vice President of Wada Farms shares in the sentiment that so many do at this time of year—the idea that when you have more than you need, build a longer table not a higher fence.

"Wada farms has many great partners in the produce industry, and with them we donate to several holiday food drives. We recognize our ability to give to those in need, and for us, it is a year-round commitment," Joe tells me. "Navidad en el Barrio and others like the 'No Hunger Holiday' in St. Charles, Missouri, which we donate to through Ole Tyme Produce, and the program Feeding America, are just a few of the ways our industry can address these causes."

The logistics and transportation of the donations made during the week of December 11-15, 2017, will be provided by the Allen Lund Company with meals being delivered on Saturday, December 16th. Donations are delivered via ALC to a warehouse location in Los Angeles and then delivered to agencies throughout Southern California for distribution to the most in-need families.

ALC is continuing to reach out to shippers in the Western U.S. that ship items which can be used to complete a meal for these families' Christmas dinner. Should your team choose to participate, your company logo will be featured in any promotional materials that are developed, as well as placed on the program’s website, so rally around this special initiative and join the Allen Lund Company in giving back this holiday season.

ALC Logistics has been providing transportation software solutions to shippers since 1994. Operating under the Allen Lund...

Dayka & Hackett LLC is a grower/importer/shipper of fresh fruit. Products are sourced globally to meet the demanding year...