CALIFORNIA - With several bouts of rain snow and gracing California over these past few weeks in January, the state’s snowpack is now in prime position to take on the harsh summer months, forecasters are saying.

According to new numbers from the National Weather Service, California’s snowpack above 6,000 feet is now topping off at an impressive 10 feet, even reaching 20 feet at the highest peaks in the Sierra.

"This winter is just pretty much crushing a lot of records we've had around the region," Chris Smallcomb, Meteorologist for Reno’s National Weather Service office told SF Gate. "When we look at the Northern Sierra, we're seeing numbers like we did during the 1983 El Niño winter.” 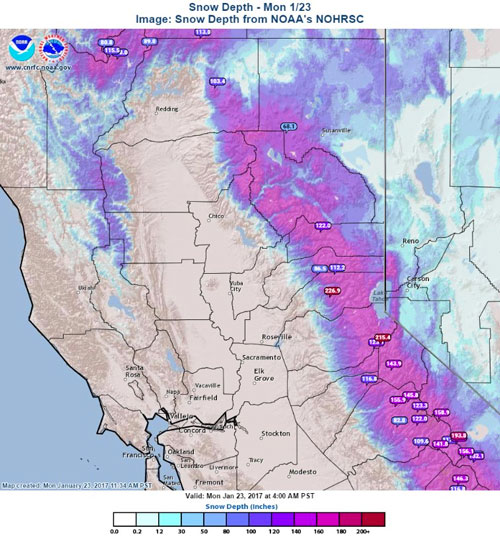 Since October 1, the National Weather Service reports that downtown Los Angeles, one of the most drough-inflicted regions of the state, has received more than 13 inches of rain (216 percent of average). Since January 1, the Sacramento area has seen around 10 inches of rain, and Grass Valley in the higher elevations topped off at about 25 inches. AccuWeather reports that since the middle of November, more than 25 feet of snow has fallen in the Sierra Nevada region.

Thanks to all that wet stuff, as of Monday, the California Department of Water Resources is reporting a 193 percent of average total for this point in the season, and according to the U.S. Drought Monitor, huge portions of Northern California are now officially out of any drought status. According to Sacramento’s KCRA Weather Team, the snowpack has not been this deep since 2011.

Does that mean we can stop our collective rain dances as we head even further into the state’s wettest season? Not exactly.

“It’s not likely that this month or next month we’ll erase the drought because our deficit is so large,” Alex Tardy, Meteorologist for the National Weather Service in San Diego told the Press Enterprise. “The one thing we have to keep in mind is that our deficits are still 20 to 24 inches of rain over the past six years.”

Either way, this progress is something to celebrate in my book. Stay tuned as we continue to take a deeper look at California’s drought and all the weather affecting the produce industry.