SALINAS, CA – The Organic Produce Summit has added another industry leader to its line up of keynote speakers. Today, the company announced that David McInerney, Co-Founder of online fresh food grocer Fresh Direct, will be the fourth keynote presenter at the nearly sold out OPS 2017.

“Understanding what we’re eating and who’s growing it are the most important—yet often forgotten—details when it comes to what we put in our bodies,” McInerney said. “To meet and talk with those individuals and companies growing organic fresh produce and marketing it to consumers across the globe is truly an honor.”

According to a press release, McInerney and his team spend more than half the year traveling around the globe to learn, investigate, explore, and taste fresh food. Fresh Direct is recognized as a pioneer in e-commerce/direct to consumer delivery. The company, founded in 2002, has been offering fresh food at comparatively low prices directly to consumers throughout urban areas in the Northeast. 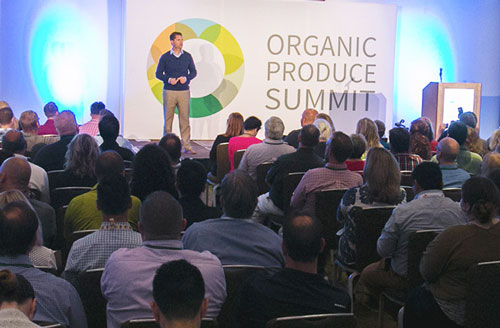 McInerney’s addition rounds out what promises to be an engaging slate of speakers delivering keynote presentations at OPS 2017. Attendees will hear from noted dietician and author Ashley Koff; the co-founders of The Organic Coup, America’s First USDA Approved Organic Fast Food, Dennis Hoover and Erica Helton; and a Retail Roundtable presentation exploring the insights, opportunities, and challenges facing retailers in the multi-billion-dollar organic fresh produce industry.

“In addition to an informative series of educational sessions, we are thrilled with our line-up of keynote presentations,” said Susan Canales, Director of Operations, for OPS. “Our attendees will have an opportunity to learn from influential thought-leaders in three major areas of organic produce sales—retail, the up and coming foodservice sector, and the dynamic direct-to-consumer model changing the way all shopping is done. Our attendees will gain insightful and useful information on how leading companies are marketing organic fresh produce to consumers and the opportunities to drive sales into the future.”

Canales noted in the press release that only a very limited number of general registrations to OPS 2017 remain available, and the event is expected to sell out by the end of this month.

“The overall response and enthusiasm for OPS is unbelievable,” Canales said. “We wish we had greater capacity to handle a larger audience, but we are confident the intimacy and energy of OPS 2017 will be unlike any other industry trade event.”

More on information on Organic Produce Summit 2017 is available here.