WENATCHEE, WA - Sometimes, during these dark winter months, all the consumer needs is a marketing mirage to reignite their fresh produce flame, and consumers have found this in the premium apple provider Stemilt Growers. The company’s Piñata® apple season has pressed pedal to the metal, popping up in produce departments across the country. To get a better sense of this iconic campaign, I spoke with Stemilt Marketing Director Roger Pepperl.

“Our Piñata program remains on a steady track as the variety has reached our desired crop size,” he said. “The Piñata orchards have reached an ideal maturity level, and the fruit that is coming off the trees has a perfect dessert quality.”

Roger continued, explaining that the Piñata apple continues to sell out each year at retailers throughout North America. In addition to the retail response, consumers have continuously come back asking for the product.

“We have a good mix close to 50/50 of organic and conventional product. Piñata is a unique variety in that it is a cross of three heirloom varieties: Duchess of Oldenburg, Cox’s Orange Pippin, and Golden Delicious. The cross delivers a beautiful reddish-orange skin with a slight yellow background,” Roger told me. “It has attributes that make it a great ‘out-of-hand’ apple while also being one of the best, if not the best, for culinary uses. The Golden Delicious in it gives it the ability to be baked or sautéed without losing its texture. It gives dishes a great apple experience as the apple softens in the cooking process. It is the best apple pie selection in that the Orange Cox Pippin gives it the acid to deliver the taste that you would need to get from adding lemon or quince to the pie. It gives you a real apple taste experience.” 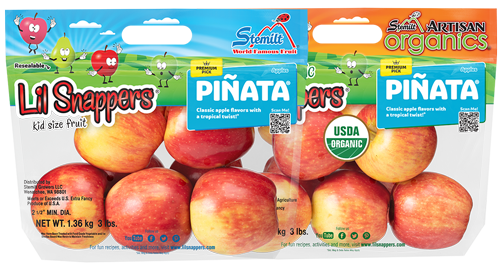 Another unique aspect of this apple is the different packaging offered by Stemilt. According to Roger, bulk organic and conventional Piñata are the most popular, but the company also offers 3 lb conventional and organic Lil Snappers® packages that are mainly marketed toward kids. Additionally, Stemilt offers a 5 lb stand-up pouch of Piñata as part of its Apple Lovers program as well as a 4 lb conventional bag. 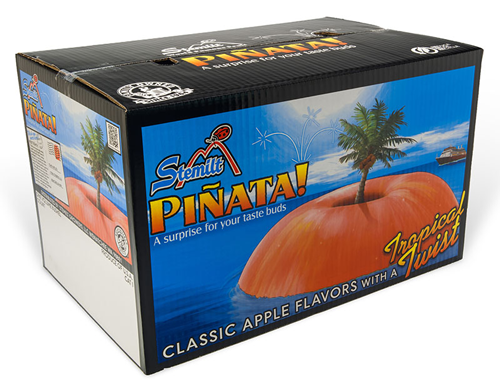 “Piñata’s main merchandising support is its iconic box that has become a fixture in January and February promotions that often include tropical fruit promotions,” said Roger. “In a consumer survey that challenged people to call out the flavors this apple delivers, the consumers said that the overtones were a tropical flavor, which of course comes from the acid of the Cox’s Orange Pippin. So, we built the branding around a tropical theme. The apple is floating in the ocean with a cruise ship coming in the background, and the apple has a palm tree where the stem should be. It is a fun way to market an apple during the dreary months of winter, which are our best months of sales. Retailers use these boxes to build big displays, and we often promote display contests and tie in with the dietitian programs. We also use social media channels to promote the apple in markets we are heavy in.”

Lastly, Roger relayed that the Piñata Lil Snappers and Apple Lovers options are great packages to sell digitally for curbside and home delivery. According to him, building apple sales digitally requires better packages that encourage bigger purchase size, and these packages deliver.

For more exciting campaigns popping off across the industry, stay tuned in to AndNowUKnow.