GILROY, CA — This year the 2016 Northern California pepper harvest started strong in July for Uesugi Farms. While green bell peppers and hot peppers were all on time, varieties such as mini-sweets, red bells, and yellow bells came in a week later. Additionally, heat ended the Bakersfield harvest early, while unseasonably cool weather swept into Northern California and created a short gap in supply.

“Even though the cooler weather last week slowed us down a bit, we’re expecting pepper production to speed up thanks to a warmer forecast this week,” said Pete Aiello, General Manager at Uesugi Farms, according to a press release.

The Northern California pepper harvest is expected to last through October or early November, at which time Uesugi Farms will move its operations down to the Coachella Valley to continue its production there. Uesugi Farms is a year-round supplier of a variety of peppers, sweet corn, and Napa cabbage. It also produces pumpkins and beans on a seasonal basis.

Northern California is important for the pepper season because of the moderate climate and long growing season. The region is especially important for Uesugi, since it is where the company has the most crop acreage, volume, and variety supporting its year-round supply of peppers. Some of the Northern California locations in which Uesugi grows and harvests include Gilroy, Morgan Hill, Hollister, Brentwood, and Lodi.

“It’s one thing to manage your production from various locations in and out of state, but when it’s right in your own backyard, you’ve got better control of the growing and harvest, and that’s one of the things we look forward to during the Northern California season,” said Aiello in the statement. 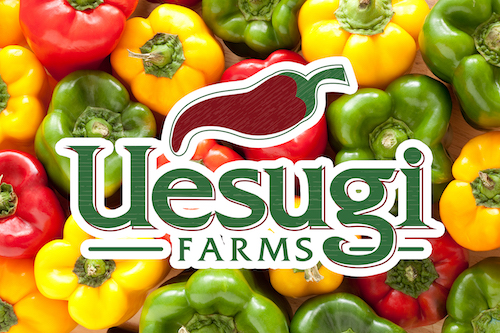 Uesugi Farms also expects increased pepper production compared to last year due to expanded acreage, which means even more tasty and refreshing peppers for its customers.

Premium quality and exceptional service is our promise! We’ve been dedicated to growing the finest bell peppers, chili...