Could Apple's 5 Billion Dollar Campus be the Future of Company Headquarters?

CUPERTINO, CA - With all the buzz surrounding the iPhone 6 and the Apple Watch lately, there’s yet another project still in the works for Apple...and this one comes with a $5 billion price tag. As pricey as it may seem, this latest venture for the tech giant may reveal what your company’s next headquarters could look like. 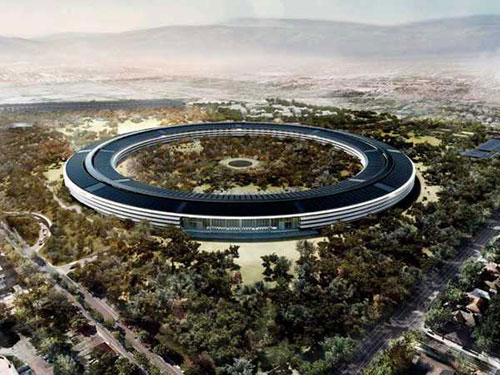 Is it a spaceship? A top secret military base? A lair for a James Bond-esque villain perhaps? Not quite. This is Apple’s colossal $5 billion campus currently under construction in a 176-acre site at Cupertino, CA.

“It’s a little like a spaceship,” said Steve Jobs when he presented his plans in front of the Cupertino City Council shortly before his passing. “We have a shot at building the best office building in the world. I really do think that architecture students will come here to see it.”

Apple is sparing no expense. Jobs’ plans included more than 6,000 trees (cherry, apricot, plum, olive, and apple trees, to name a few), underground roads, parking spaces, and even an auditorium, numerous cafeterias, and curved exterior walls with 40-foot, floor-to-ceiling panes of concave glass from Germany, according to Bloomberg Businessweek. You won’t find a single straight piece of glass here.

The massive ring-like structure is estimated to be four stories tall and will house approximately 14,200 employees, according to LA Times. It’s even being said that this colossal headquarters will rival the Pentagon in terms of size. In price alone, it already beats out the $3.9 billion being spent on the One World Trade Center complex in New York. 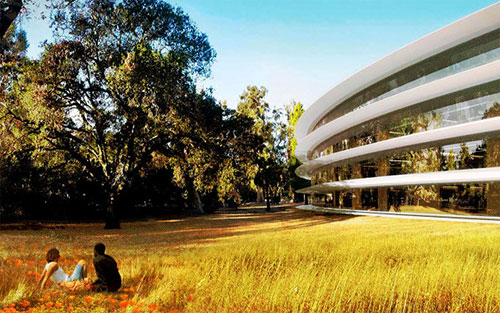 Approximately 700,000 square feet of solar panels, enough to generate 8 megawatts of power, or power for about 4,000 homes, will energize the campus. Jobs also envisioned “climate responsive” technology that would automatically let in the appropriate amounts of light and wind to keep the building as comfortable as possible.

YouTube user jmcminn captured video of the campus under construction by using a GoPro camera mounted on a drone.

Check out just how tremendous the structure is compared to the surrounding buildings.

Upon completion sometime in 2016, only six structures will be visible: the headquarters, the lobby to the underground auditorium, a four-story parking garage, a fitness center, and two research and developmental labs housing testing facilities such as an anechoic chamber for analyzing antenna signals, according to Bloomberg Businessweek. 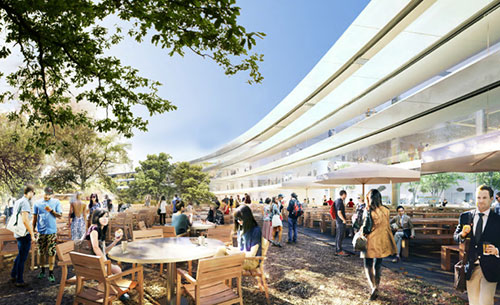 Still, that $5 billion cost is not something to scoff at. Whether or not other companies will follow suit and try a similar futuristic aesthetic has yet to be seen, but this is definitely one project I’ll be keeping my eye on.

Let us know what you think about Apple’s new campus by voting in the surveys below!

TONE Networks Adds The GIANT Company as a Client