Weather is relatively quiet in the principle “in-season” growing regions around the country and world right now. There are not any major incidences I can see which should dramatically affect production or quality of commodities.

Here are few items of interest…..

British Columbia, Canada, which is a large producer of cherries and berries this time of the year, will experience a heat wave starting today and lasting through next Wednesday. Temperatures will rise approximate 10° above where they were yesterday. Maximum temperatures will range from the mid-80°s to low 90°s depending on the exact location in the area. These warmer temperatures could have a positive impact on production numbers, but please check with shippers. Temperatures will return to normal (70°s to low 80°s) starting next Thursday.

San Joaquin Valley, California, will see a warming trend this weekend with high temperatures rising by 4° to 5°, getting to a peak of 105° on Monday. By next Thursday, however, things will change, and highs will drop in the mid-90°s, with low temperatures in the upper 60°s. Next week’s temperatures will be 6° below normal if you can believe it.

The remainder of the country can expect normal temperatures and precipitation amounts for this time of the year.

Parts of Chile will experience a mid-winter heat wave starting today and continuing through next Tuesday. Many citrus growing regions will see a temperature jump of 20° from yesterday to today. Maximum daily temperatures will be in the mid-70°s today and will hit a maximum of 82° on Sunday before cooling off in the upper 70°s on Monday. Temperatures will remain warm through Tuesday before dipping back down into the low 60°s on Wednesday, August 7th. The minimum temperature for the regions will get as high as 46° during this time before dropping back in the upper 30°s later next week. We could possibly see a spike on production next week due to these temperatures. Please check with shippers.

The disturbance off the coast of Florida we mentioned on Tuesday is expected to bring local heavy rainfall over portions of the Florida peninsula during the next day or two. Significant development of this system is not expected before it merges with a front and accelerates northeastward off the southeastern U.S. coast on Sunday. I'm not sure if Georgia will see any effects from the storm.

In the Pacific, there are a couple of named storms, but neither will have any impact on the coast of Mexico.

Thanks again, and we'll be back next week with another report! 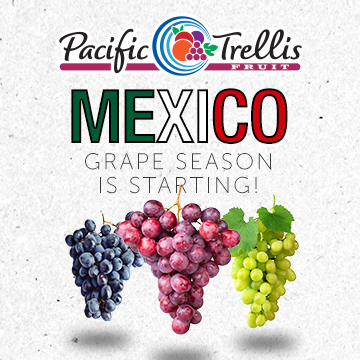