Snow Totals Above Normal in Most of the West

The graph below shows snow totals in the major mountain ranges in the West as it relates to water created later in the season. All the blue and green is great news because this represents above average numbers. The highest snow to water totals are in the Sierra Nevada Mountains of California which is great news for farmers of the San Joaquin and Sacramento Valleys. 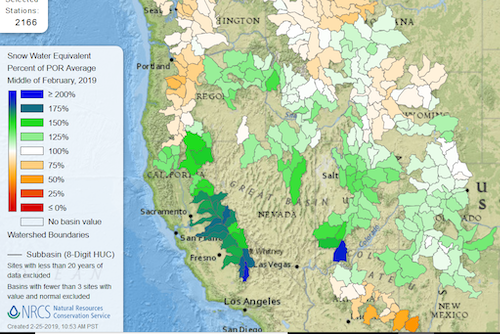 The mountain ranges in Colorado and Utah, which supply water to the desert growing regions of southern California and Arizona, are also above average so far this year.

This year’s storms in the West are a dramatic change compared to last year, which was extremely dry. This year's numbers are about 200 percent higher than last year's totals. This will be good for all the reservoirs in the Western states.

Lake Mead outside of Las Vegas is only at 40 percent of capacity and in very dire straits. Normal capacity is about 75 percent. Before this winter, there was fear of levels dropping too low to pull water from the reservoir. Hopefully, this year will recoup some water.

The Cascade Mountains of Washington and Oregon are below average so far this year, but with the overall totals they get throughout the year being down a small percentage, this should not affect them overall.

We will check back on this in a month. As of right now, it appears there will be plenty of water this summer for all crops coming out of California.

California Wine Country to Flood in the Next Few Days 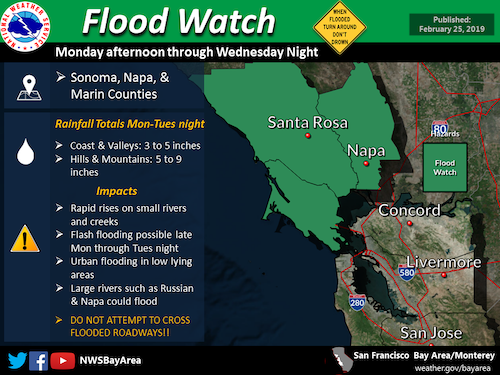 Wine grape growing regions of California will see heavy flooding over the next few days. They are expecting up to 9 inches in some areas. This same storm will dump water into the Sacramento Valley region of California as well.

Culiacán is beginning to heat up once again. Last night's low temperature was 52°—the first time it has been in the 50s in over a week. Today's maximum temperature will be 92° with a minimum temperature of 53°. The remainder of the week will see highs in the 90s and lows in the mid-50s. I would expect volumes to increase a bit on all items coming out of this region.

Ciudad Obregón, Sonora, is expecting a chance of rain at the beginning of next week. Right now the forecast is for light showers on Monday, Tuesday, and Wednesday. This is a growing region that is getting ready for its spring season.

The berry regions of central Mexico are also experiencing perfect conditions. The main areas in the state of Michoacán and Guanajuato currently have high temperatures in the mid-80s and lows in the low-50s down to the high 40s depending on the exact location.

Thank you again for your support, and we will be back later this week with another update.