FRANKLIN, TN - Could Carl’s Jr. be the next major food industry power player to be taken under Amazon’s wing? If the fast food company's latest online marketing campaign is to be taken at face value, Carl’s Jr. may be gunning for it. As of 3 AM ET on Monday, the fast food brand began tweeting at Amazon once every hour, offering up a few "billion dollar" ideas in an attempt to seduce the e-commerce giant into a buyout. 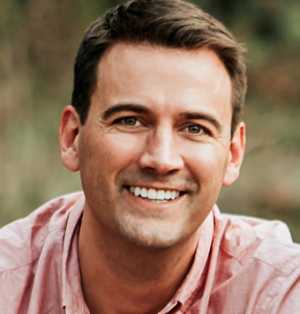 "This is about generating a conversation around a partnership,'' Jeff Jenkins, Chief Marketing Officer, Carl’s Jr. and Hardee’s, shared in an interview with USA TODAY. "The tweets are obviously a start to try and see where the dialogue goes…have a lot of fun with it, and see if they find the spirit of it as fun as we do.’’

According to USA Today, potential ideas Carl’s Jr. has been throwing at Amazon include a tongue-in-cheek "Eater Reader," a food tray that also serves as a cradle for your Amazon's Kindle tablet, and “Prime Thru,” an express drive through lane at Carl’s Jr. locations designed just for Amazon Prime members. 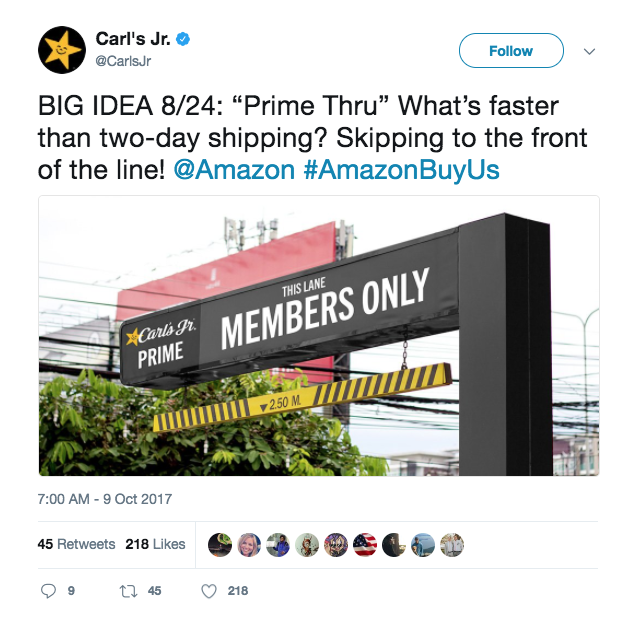 Carl’s Jr. has never been known for being shy with its marketing strategies in the past, making a name for itself though sexy ad spots in which scantily clad ladies enjoy one of the company’s signature messy burgers. But could this campaign actually lead to a deal?

Amazon is no stranger to attention in recent months, with many cities and companies alike courting the e-Commerce giant. For one, several cities have been going head-to-head to win rights to be the home of Amazon’s second headquarters, HQ2, which is projected to bring as many as 50,000 new jobs and insert billions of dollars into the local economy. 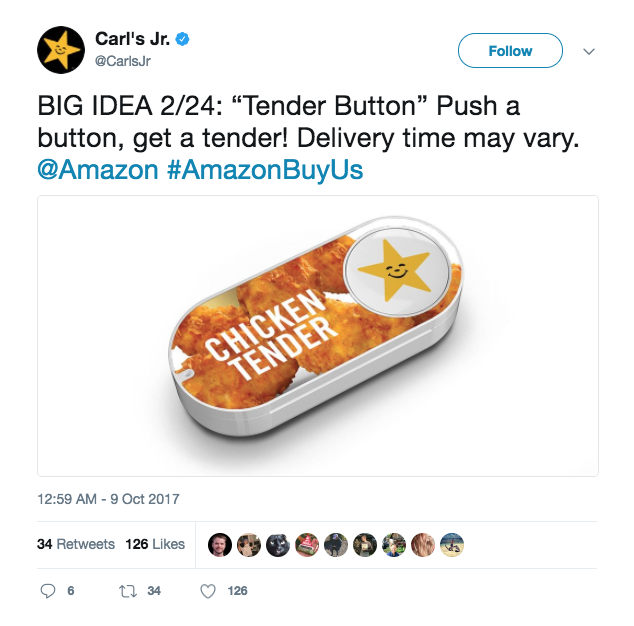 "We've got to be impossible to ignore,” Jenkins said of Carl’s Jr.’s Amazon marketing strategy. “Both Carls Jr. and [sister brand] Hardee's have a history of provocative advertising...The question is how do you modernize that.”

USA Today reports that Carl's Jr. plans to continue its tweet storm through the remainder of the week, preparing to offer up even more ideas, such as the "Tender Button" to get a chicken tender delivered straight to your door through Amazon. 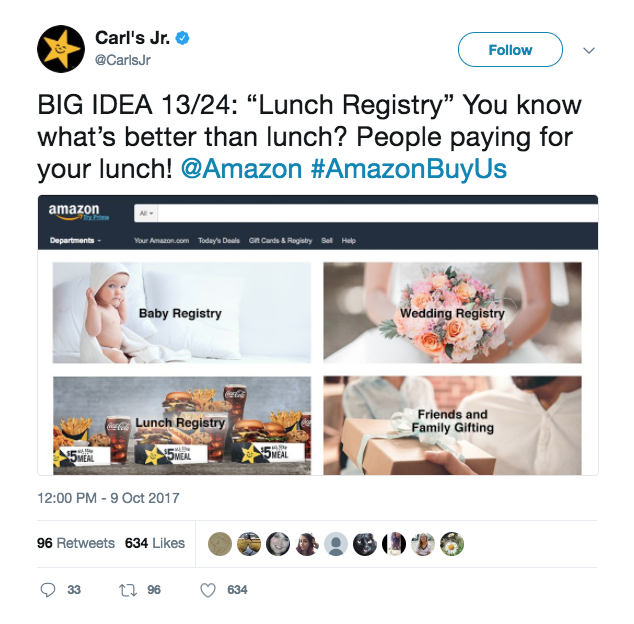 "Some of the ideas are closer to home (to what) we could execute, but some are obviously pushing the envelope," Jenkins said. “People always overestimate what could happen in two years, and underestimate what will happen in ten.’’

Will you soon be ordering up burgers and fries from your local Prime Carl’s Jr. delivery location or scrolling through your Kindle with your new Carl’s Jr. fry stylus? AndNowUKnow will keep bringing you the latest.