YAKIMA, WA - A long fruit-filled summer is in store for Superfresh Growers® fans, as the grower has reported high apple and pear sales. The company’s Autumn Glory® apple shows remarkable growth thanks to the all-star apple variety’s unique flavor and popularity with consumers. Pears are also ready to drive sales throughout the season, with the demand for organics going strong.

“We continue to be blown-away from the positive consumer feedback for Autumn Glory apple. The demand is outstanding. When Autumn Glory leaves retail shelves, we hear about it. Consumers make a point to call in, Tweet, or comment on Facebook asking where their favorite apple went,” said Catherine Gipe-Stewart, Communications Manager, in a press release.

Already in its third month of consecutive triple digit growth, the Autumn Glory apple is making Superfresh Growers history, with year-to-date national sales up a whopping 156 percent—by far the largest percentage growth of any apple variety, the company noted. Available exclusively from Superfresh Growers, Autumn Glory resonates with shoppers who responded to a recent consumer survey with comments like, “This is a trip,” “I really do taste the cinnamon,” and “Wow. This is a winner!” The variety was chosen for its unique and enviable flavor profile, ease to grow, and excellent storage and shelf life. With more than half of consumers surveyed claiming that the Autumn Glory was better than Honeycrisp, it’s no wonder that the variety is ranked #15 in sales, nationally. 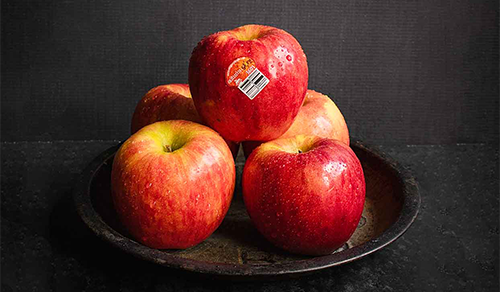 The month of March saw relatively flat apple sales, but some varieties stood out above the rest. The Autumn Glory, Honeycrisp, and Gala apple varieties all saw positive growth, around five percent, though core varieties are still vital to promoting the entire category, which Superfresh Growers will be offering throughout the summer. This season will see numerous promotional opportunities, including National Apple Pie Day on May 13—an ideal time to promote Granny Smith, Fuji, and other core varieties. Organic apple sales were flat nationally, though some regions showed strong growth, including the Plains (+10.2%), California (+6.6%), and Great Lakes (+4.6%), which all show organic growth year over year.

Though most pear sales have been flat, organic pears have seen sales growth, with organic pear dollars up 6.8 percent and volume up 10 percent. In organics, Anjou pears represent over half of pears, with Bartlett, Bosc, and Red pears behind them. Organic Red Anjous have seen positive growth in the Plains, Midsouth, South Central, and Northeast regions. Red Anjous in particular are a perfect addition to salads, cobblers, and pies, thanks to their abundant juice and sweet flavor. Organic Red Anjous also hold up well to cooking, grilling sublimely. Pear burgers, anyone?

Northwest-grown apples and pears have plenty of promotional opportunities this spring and summer, with no need for import programs. Additionally, Superfresh Growers looks forward to a strong cherry, blueberry, and apricot season. Reach out to your Superfresh Growers representative to learn more about its fruit programs or category management information.