COSTA RICA - This new water system is bananas! Fyffes banana farm Finca Esmeralda in Costa Rica has implemented a closed-water recycling system, which has successfully reduced water consumption from 200 to 40 litres per box of bananas.

“The water coming out of these tanks runs along an off-flow drain and organic matter gets removed from the water using wire screens,” said Hugo Hays, Fyffes Global Director for Food Safety and Compliance. “Next the water travels down a ramp called a ‘hydraulic leap,’ gathering speed and turbulence at which point we add Alum.”

Hays continued, stating that “Alum, or Aluminate Sulphate, is a mineral frequently used in conventional water purification processes to remove suspended particles in the water. By adding Alum it causes the latex in the water to flocculate (cluster/clump together) and precipitate to the bottom of the water column.”

On World Water Day, Fyffes was eager to share the technique deployed to reduce water consumption during the banana packing process. The process involves using various tanks and stages so water can be reused while maintaining the highest levels of sanitation and cleanliness.

“The water then makes its way to the flocculation tank,” added Hays. “This is a cleverly designed tank where a zigzag path is followed by the water, traveling with speed at first (to ensure the Alum and water thoroughly mix) but gradually slows, allowing the floccules to form. The water then enters the settler tank at a very slow speed.”

After settling into this slow speed, Hays noted, the particles of latex and alum begin to sift to the bottom of a tank, separating from clean water. 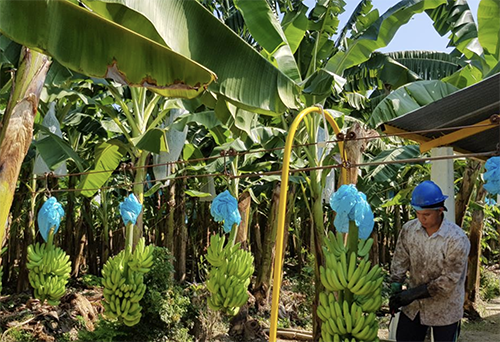 “Here, the flocculates settle at the bottom of the tank, leaving clean water on top, ready to be used again,” said Hays. “Finally, the clean water is skimmed off and collects in a reservoir tank ready to be reused. A small amount of chlorine is added to the water before, once again, re-entering the de-latexing tanks. The flocculated material from the bottom of the settler tank gets collected and placed in a separate tank which consists of a filter system, allowing excess water to drain off and return to the recycling system. The latex-alum residue which remains is then suitable as a fertilizer in the field.”

According to a press release, the biggest hurdle with reusing water is removing latex; “a naturally occurring protein, which leaches from the bananas while they sit in aptly named ‘de-latexing’ water tanks, before being de-handed and getting placed on selection trays.”

For Fyffes sustainability strategy, water conservation is a massive source of strength for the company and contributes to the United Nations Sustainable Development Goal for clean water and sanitation.

For more updates on how Fyffes will continue to use its water recycling system, keep reading AndNowUKnow.